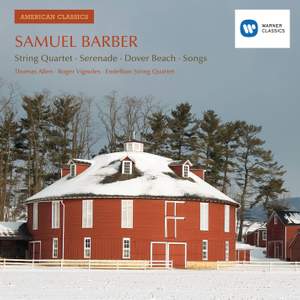 Mostly a wide-ranging choice of Barber's songs, intense and rather Brittenish in idiom, but polished and often warm-hearted, plus his String Quartet, source of the famous Adagio. — BBC Music Magazine, November 2009, 4 out of 5 stars

With rue my heart is laden (A. E. Housman)

I hear an army

III. Sure on this shining night (James Agee)

My Lizard (Wish for a Young Love)

Although he wrote two large scale operas, two symphonies and a concerto each for violin, cello and piano, the majority of Barber's compositions were on a much smaller scale. This collection of songs and chamber pieces contains some of his earliest work, dating from 1928 to 1940, with two groups of songs from 1968 and 1972 respectively.

The Adagio movement of the String Quartet from 1936 has, in its version for string orchestra, become one of the most popular works by an American composer. Here is an opportunity to hear it as Barber originally intended, and the intimacy brought to it by a smaller ensemble lends it a greater intensity.

Barber was a fine composer for the voice and his output of songs was prolific. Dover Beach, to words by Matthew Arnold, is one of Barber's finest compositions and it is beautifully sung here by Thomas Allen.

Mostly a wide-ranging choice of Barber's songs, intense and rather Brittenish in idiom, but polished and often warm-hearted, plus his String Quartet, source of the famous Adagio.