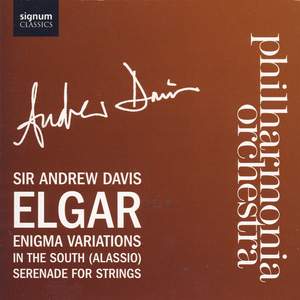 …Davis achieves a 'Nimrod' of great warmth and dignity, then after a wanly desolate seascape in the Variation 13 'Romanza', and a finale of tremendous cumulative power. — BBC Music Magazine, September 2009, 4 out of 5 stars More…

Recorded as part of their highly regarded season for the 150th Anniversary of the composers birth, the Philharmonia are joined by leading 'Elgarian' Sir Andrew Davis in truly stellar performances of three of the composers greatest works. This is the fifth disc in Signum's continuing series with the Philharmonia Orchestra, which has been met with positive reviews and revised all sales targets!

…Davis achieves a 'Nimrod' of great warmth and dignity, then after a wanly desolate seascape in the Variation 13 'Romanza', and a finale of tremendous cumulative power.

The splendour in the Philharmonia’s playing is genuinely as close to Berlin Philharmonic standards as makes no difference’ A highly impressive recording.

…Sir Andrew Davis's fifth Enigma on disc… is also… his most compelling and characterful yet, evincing an eager application, easy flow and unforced wisdom that stem from long familiarity with the score. …In the South… enshrines as personable, generously pliable and lucidly integrated a conception as I can ever recall.

...a reading clearly born of true affection for, and deep knowledge of this rich and ever-wonderful score … any Elgarian seeking these three pieces together will not remotely be disappointed.

For those who attended any of the Elgar series, this will make a fine memento, as well as providing a reminder that Davis ranks among the finest Elgar interpreters. There's a comfortable ease about his Enigma, and a surging, expansive feeling about the concert overture In the South.