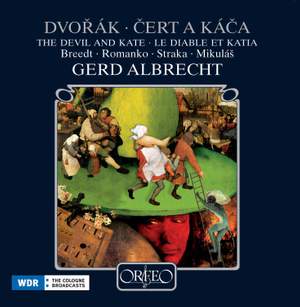 Albrecht's ear for Dvorák's exquisite orchestral colouring, notwithstanding a slightly cavernous recorded sound, leads to some remarkably beautiful episodes… Peter Straka is exceptional as the... — BBC Music Magazine, October 2009, 3 out of 5 stars More…

After Orfeo's complete recording of The King and the Charcoal Burner, which was awarded Gramophone Editor’s Choice, they now present a further instalment of their Dvorák opera cycle with the WDR Cologne Symphony Orchestra under Gerd Albrecht. Based on a Czech folk tale, it is the humorous story of the shrewish Kate who allows herself to be dragged to hell by a blundering devil who is out 'in the field'.The result, for him, is disastrous.The real beneficiaries of this 'dangerous liaison' are the crafty shepherd Jirka and a princess who at the start is not well-liked by her people. Gerd Albrecht was able to fill these roles with international stars who all had experience of singing Dvorák already. Michelle Breedt in the title role, takes quite audible pleasure at singing a comic pendant to her serious mezzo roles such as Fricka at Bayreuth. Peter Mikuláš sings the pitiful devil Marbuel, holding his own against his highly strung female counterpart with his undiminished, rich bass voice; the same is true of his fellow bass,Arutjun Kotchinian, in the part of Lucifer.We breathe a deep sigh of relief along with the Princess when she at the end succeeds in evading the clutches of this arch-devil - especially since Olga Romanko knows how to make her sympathetic, while also assigning her the necessary dramatic weight with her luminous Verdi soprano voice. And as Jirka, Peter Straka proves once more that with his beautiful, idiomatic tenor voice he is unequalled in the world when it comes to the Czech operatic repertoire.The two choirs involved have also appeared repeatedly in Albrecht's Dvorák cycle, and their contribution is deserving of special mention here.They play a major role in Dvorák's massed scenes, sweeping the listener along with their rousing, folksy dance and march rhythms.

Albrecht's ear for Dvorák's exquisite orchestral colouring, notwithstanding a slightly cavernous recorded sound, leads to some remarkably beautiful episodes… Peter Straka is exceptional as the heroic shepherd Jirka… Peter Mikuláš is near ideal as the rather timorous devil...