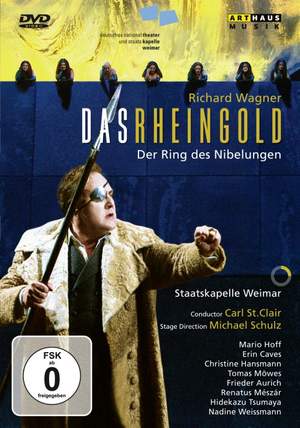 Outside Germany, the name Weimar tends to evoke mixed feelings and pictures of German history of the last hundred years. Within Germany, Weimar means a town in the state of Thuringia arguably saturated with the “Deutsche Kultur” of the “Weimarer Klassik”, the legendary Bauhaus, and finally the life and work of Franz Liszt and his son in law Richard Wagner. In Weimar Richard Wagner began composing the fi rst part of his RING-cycle, “ Das Rheingold”. In 2008 the Nationaltheater Weimar started a new production of this unique tetralogy. The conductor is Carl St.Clair, a former student of Leonard Bernstein. With Michael Schulz’ fine and highly intelligent staging this new “Ring” production on DVD and Blu-Ray becomes an outstanding document of contemporary opera theatre.