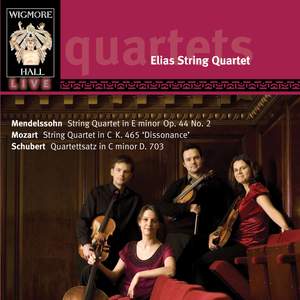 …the players capture beautifully the mix of grace and jokiness in the Mozart Minuet, and in the Mendelssohn they apply just enough rubato to give colour and meaning, without ever interrupting... — BBC Music Magazine, October 2009, 5 out of 5 stars More…

Described as “quite exceptional” (Gramophone) and a group that is “poetic, charismatic and virtuosic” (Sunday Telegraph), the Elias String Quartet is considered one of the most fresh and exciting quartets of their generation.

As their career continues to grow with extraordinary momentum, Wigmore Hall Live is proud to release this live recital recording that captures the young quartet’s fervent passion and infectious enthusiasm for the music of Mendelssohn, Mozart and Schubert.

WHLive0028 opens with Schubert’s great unfinished work, the Quartettsatz in C minor, considered to be the forerunner of the late great string quartets for which Schubert is best remembered. This is followed by possibly the most famous of Mozart’s string quartets, the ‘'Dissonance’ quartet, dedicated to Joseph Haydn.

The programme ends with string quartets by Felix Mendelssohn - the composer they hold most dear. With 2009 being Mendelssohn’s bicentenary year, the Elias String Quartet chose these works in order to showcase a side of the composer’s genius which they believe is highly underrated.

After winning all the Royal Northern College of Music quartet awards, they spent a year studying with the Alban Berg Quartet in Cologne. They have since received many honours at major international competitions, including multiple awards at the 2003 London International String Quartet Competition.

Donald Grant plays the violin that used to belong to their ‘founding father’, Christopher Rowland, who died in 2007.

Press acclaim for the Elias String Quartet at Wigmore Hall

…the players capture beautifully the mix of grace and jokiness in the Mozart Minuet, and in the Mendelssohn they apply just enough rubato to give colour and meaning, without ever interrupting the flow. The final Presto agitato is a tour de force, rightly acclaimed by the audience.

The Elias Quartet offer many delights and stand comparison with the greats. …in the Quartettsatz they revel in the Viennese charm… and find time to grow the phrases quite beautifully. In the Dissonance… there are plentiful examples of their fine musicianship, particularly in the slow movement, where their individuality comes to the fore. In Mendelssohn's Fourth Quartet... Sara Bitllock's delectable tone leading the way in the extensive first movement and the piece's underlying unease never underplayed. The Mendelssohn encore is a delightful bonus.

The players are individually brilliant, but their interplay is profound, and it is no doubt significant that first violin and cello, melody and bass, are sisters (Sara and Marie Bitlloch). The recording is ideally balanced for a string quartet.

The soaring performance of Mendelssohn's E minor String Quartet Op 44 No 2 alone justifies the cost of this CD. The impassioned opening, crisp scherzo, song-like andante and urgent agitato finale make it among the composer's most satisfying works, here warmly played.