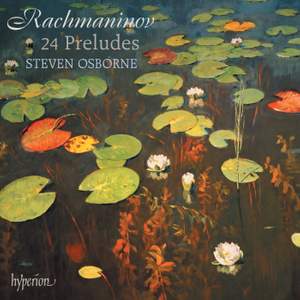 No 02 in B flat major. Maestoso

No 04 in D major. Andante cantabile

No 06 in E flat major. Andante

No 08 in A flat major. Allegro vivace

No 01 in C major. Allegro vivace

No 02 in B flat minor. Allegretto

No 03 in E major. Allegro vivace

No 06 in F minor. Allegro appassionato

No 09 in A major. Allegro moderato

No 11 in B major. Allegretto

No 12 in G sharp minor. Allegro

Recording of the Week,  Rachmaninov Preludes

In ‘one of his finest recordings to date’, Scottish pianist Steven Osborne showcases the infinite variety of Rachmaninov’s 24 Preludes in performances which combine musical intelligence with fire and tenderness.

Steven Osborne’s live performances of Rachmaninov’s preludes were greeted ecstatically by critics and audience alike: a new benchmark for performances of these works, and a new departure for this most subtle and sensitive of pianists. Now Steven has committed the complete cycle to disc—a surprisingly rare recording venture in itself. His matchless musicianship has rarely been so blazingly evident as it is here. Also apparent is his deeply individual relationship with the repertoire. This is a disc to treasure.

It's all too easy to coarsen Rachmaninov's melodic genius with an overtly applied emotionalism, its clearly drawn lines becoming smudged.
But Osborne conveys both the monumentality of these pieces, even the most fleeting, and their very human qualities. It's rare to find the balance so acutely achieved. The composer himself, of course, knew how to achieve that equilibrium, but then he had a head start.
Yet this is only a starting-point – the detail is equally delectable: the way that Osborne shapes the tear-stained melody of Op 23 No 4, for instance, and picks out the line from the dark, bustling figuration of Op 23 No 7 or the lefthand countermelody of Op 23 No 8. Then, in the Op 32 set, there's the simplicity of the second, with its incessant tolling around the note C, through to the meditative quality of No 10, the line rising out of the depths as sonorously as Debussy's cathedral. Another fascination is the way Osborne's range of touch puts the Preludes into such a clear historical context.
Osborne throws down the gauntlet with a towering C sharp minor Prelude: it's arguably too slow but makes an apt curtain-raiser on a set that glories in the magnificence of this music. And while there's no empty barn-storming on display here, that's not to say the technical challenges are shirked or underplayed in any way.
There are few pianists who offer such range and depth of palette.

It's all too easy to coarsen Rachmaninov's melodic genius with an overtly applied emotionalism, its clearly drawn lines becoming smudged. But Osborne conveys both the monumentality of these pieces, even the most fleeting, and their very human qualities. ...while there's no empty barn-storming on display here, that's not to say the technical challenges are shirked or underplayed in any way. There are few pianists who offer such range and depth of palette: not even Ashkenazy's seminal reading.

Extremely impressive all round … Osborne lavishes a remarkable level of authority on every one of these masterworks, playing with a rare combination of technical ease, tonal lustre and idiomatic identification. He also has the undeniable advantage of a
magnificent Steinway instrument with a rich, opulent sonority and great solidity in its bass register … In summary, Osborne goes from strength to strength as he moves through the cycle, wrapping up the final page of the concluding D flat prelude in a blaze of glory … For a truly spellbinding
modern account, Osborne now holds the winning ticket

Stephen Osborne is well up to the task, and like any truly great pianist makes [the preludes] sound easy. He also plays with real authority and combines his trademark musical intelligence with both fire and tenderness. Very highly recommended.

His dazzling technique illuminates the virtuosic allegro and allegretto sections, and his playing has a Rachmaninovian pliancy and beautifully achieved rubato in lyrical passages. One of the piano discs of the year.

These are wonderfully natural performances: the best on disc since Vladimir Ashkenazy's set from the 1970s, with Osborne always alert to the variegated surfaces of the music, yet mindful of the deeper currents that run beneath. His sound is perfectly judged, never overbearing in even the heftiest passages, and translucent enough to allow the inner lines, which often in Rachmaninov have an expressive life all their own, to be heard. A lovely disc.

This sensational pianist is usually associated with Messiaen or Tippett. Here, playing a Steinway, he brings his technical wizardry and, above all, his penetrating musical intelligence to these much-recorded works of Rachmaninov. There's no indulgence and no piano bashing. In his combination of modesty, inner fire and natural virtuosity he brings to mind that other Rachmaninov master, Ashkenazy.

A quick dip into Rachmaninov’s scattered recordings from this repertoire finds the composer boxed in, not just by ancient recording technology but by his own circumspection. Osborne, by comparison, flies free without ever rampaging. Sorrow and sunlight, death and life: all Rachmaninov is here, in three dimensions, luscious colour and widescreen. A most exciting release.