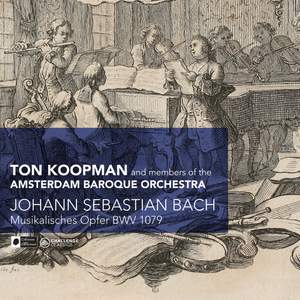 Members of the Amsterdam Baroque

Played with telling clarity and suppleness by members of Amsterdam Baroque, the canons never sound dry or academic… — BBC Music Magazine, June 2009, 4 out of 5 stars More…

Canon a 2 Violini in unisono

Canon a 2 per Motum contrarium

Canon a 2 per Augmentationem, contrario Motu

Canon a 2 per Tonos

The Musical Offering, BWV1079 is the only instrumental work by Bach for which we have a detailed knowledge of its origins. It owes its creation to Bach’s visit to the royal court at Potsdam which lasted two days between 7 and 8 May 1747, a landmark event in the composer’s biography. German newspapers reported the memorable encounter between King Frederick II of Prussia and the “famous Capellmeister Bach in Leipzig” just a few days later. They describe the occasion and mention that Bach found the theme given to him by the king for improvisation on the clavier to be “the epitome of excellence”, and hence wished to “put it on paper in a proper fugue, and afterwards have it engraved in copper.”

The fact that Bach specifies the instrumentation in only a few of the movements has led to a profusion of “realizations” of the work (for example, Webern’s orchestration of the six-part ricercar), most of which have little to do with the actual practice of chamber music in the 1740’s, which was restricted to quite a small number of instruments—usually violins (or instruments which could imitate the violin, such as the flute) in the treble, harpsichord and either gamba or cello on the continuo.

Ton Koopman studied harpsichord with the legendary Gustav Leonhardt, and has over a distinguished career of 40 years become one of the worlds leading experts in the field of baroque music performance.

In recent years he has directed the Amsterdam Baroque Orchestra in a series of critically acclaimed recordings of the complete cantatas of J. S. Bach, volume 22 of which was the recipient of a BBC Music Magazine award in 2007. In 2006 Ton Koopman was awarded the Bach Medal by the city of Leipzig in recognition of his major contribution to Bach performance and scholarship.

Played with telling clarity and suppleness by members of Amsterdam Baroque, the canons never sound dry or academic…

First, Koopman’s harpsichord dances on its own; then string quartet, flute and bass viol join in the joyfully ingenious canons and fugues on the theme suggested by Frederick the Great of Prussia. The ornamentation is never fussy, while the recording is bright — bottled sunshine, that’s what this CD is.