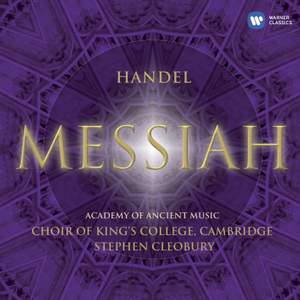 And the glory of the Lord (chorus: Andante)

But who may abide? (alto air: Larghetto - Prestissimo)

And He shall purify (chorus)

O thou that tellest (chorus)

The people that walked in darkness (bass air: Larghetto)

For unto us a child is born (chorus: Andante allegro)

There were shepherds abiding in the field (soprano recitative)

Then shall the eyes of the blind (alto recitative)

He shall feed his flock ... Come unto Him all ye that labour (soprano & alto duet: Larghetto e piano)

His yoke is easy (chorus: Allegro)

He was despised (alto air: Largo)

And with his stripes (chorus: Alla breve, moderato)

All they that see him (tenor accompagnato: Larghetto)

He trusted in God (chorus: Allegro)

He was cut off (tenor recitative)

But Thou didst not leave (tenor air: Andante larghetto)

Lift up your heads (chorus: A tempo ordinario)

Unto which of the angels (tenor recitative)

Let all the angels of God (chorus: Allegro)

Thou art gone up on high (alto air: Allegro larghetto)

How beautiful are the feet (soprano air: Larghetto)

Their sound is gone out (chorus: A tempo ordinario)

Why do the nations (bass air: Allegro)

He that dwelleth in Heaven (tenor recitative)

I know that my Redeemer liveth (soprano air: Larghetto)

Behold I tell you a mystery (bass accompagnato)

Then shall be brought to pass (alto recitative)

O death, where is thy sting (alto & tenor duet: Andante)

But thanks be to God (chorus: Andante)

If God is for us (soprano air: Larghetto)

“I would happily sit in King’s College Chapel listening to this choir sing for the rest of my days.” The Times

The Choir of King’s College, Cambridge will perform Handel’s best known work, Messiah, on Palm Sunday, April 5 2009 in the magnificent setting of King’s College Chapel. The performance will be conducted by Stephen Cleobury, Director of Music at King’s, and features the Academy of Ancient Music and soloists Ailish Tynan, Alice Coote, Allan Clayton and Matthew Rose. It is part of the Easter at King’s festival of music and services, now in its fifth year.

This will be the first time a choral concert has been carried live via satellite. It will be shown in over 85 cinemas across Europe with US broadcasts, also on April 5, confirmed for around 50 screens to date and Canadian broadcasts scheduled in over 30 cinemas for April 11. EMI Classics will make the live concert recording available digitally on April 14, the actual anniversary of Handel’s death, and will release the physical CD later in the month.

Through an exclusive agreement with Opus Arte, EMI will also release the film of the concert on DVD in November 2009, in the run-up to Christmas, while additional cinema broadcasts are planned in the UK, other European countries, the United States (a 3D version will be shown as well) and Australia during the same period.

George Frideric Handel’s crowning masterpiece, his oratorio Messiah, was a hit at its premiere in April 1742 and remains among the most popular works in Western choral literature. A native of Germany, the composer lived in England from 1712, where he was considered one of the leading musical figures of his day. In 1741, the year in which he wrote Messiah, however, Handel found himself on the verge of bankruptcy, depressed and broken following the failure of several of his operas. In London it was even being said that his career as a composer was over.

Not so in Ireland, where the Lord Lieutenant and governors of three charitable organisations invited Handel to Dublin to conduct a performance of one of his works for charity. Having recently completed his oratorio Messiah, the composer decided to use the invitation as an opportunity to present this new work to the world. The premiere – at Neal’s Music Hall in Dublin in 1742 – was eagerly awaited by the Dublin public and the hall was sold out.

Handel based Messiah on a libretto by Charles Jennens that employs verses from the bible to present the life of Jesus. The work is in three sections: the Advent and Christmas; Christ’s passion; and the events told in the Revelation to St. John. While the composer intended the oratorio to be secular theatre, today Messiah is performed equally in churches and concert halls, by professionals and amateurs alike, usually during Lent (prior to Easter) or Advent (prior to Christmas).