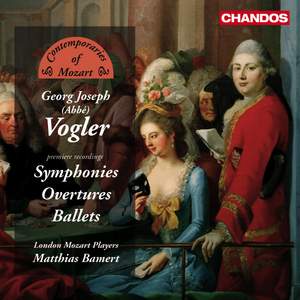 Matthias Bamert and the London Mozart Players perform all these pieces with their customary care and polish… — BBC Music Magazine, October 2009, More…

The celebrated Contemporaries of Mozart series continues apace with the compositions of German composer George Joseph Vogler. The London Mozart Players which celebrates their 60th anniversary in 2009 perform under the direction of Matthias Bamert.

Also known as Abbé Vogler, Vogler was idealized in Robert Browning’s poem ‘Abt Vogler’, with its subtitle ‘After he has been extemporizing upon the musical instrument of his invention.’ In his own day, Vogler was indeed famous for his improvisations. He was also a celebrated teacher, whose pupils included Weber and Meyerbeer; but he seems to have had little renown as a composer, that is, until now.

Vogler was born near Würzburg in 1749, the son of a violinist and instrument maker. After studying at Würzburg University, he moved to Bamberg for three years of religious instruction: hence the references to Abbé. In the early 1770s he was appointed almoner, then chaplain, to the court at Mannheim. By 1775 he was appointed the vice-Kapellmeister. Mannheim was the home of a flourishing musical establishment, and the court orchestra had an international reputation: Vogler’s colleagues included Christian Cannabich. He would later hold the position of court music director at Stockholm (1786-89) and at Darmstadt (1807-14).

The scope of Vogler’s musical accomplishment, encompassing sacred vocal works, operas, instrumental ensemble pieces and solo keyboard music, challenges generalization. The surviving symphonies and concertos by Vogler reveal polished craftsmanship and a flair for orchestral colour. He was fond of highlighting wind instruments, and the use of two pairs of horns in complementary keys is a trademark. All the works which here receive their first recording reflect this approach.

Although relatively few of Vogler’s works achieved wide public recognition, various works were performed in concerts well into the 19th century, and Robert Schumann praised Vogler’s music as late as 1838.

Atmospheric and colourful works by a composer dismissed by Mozart.