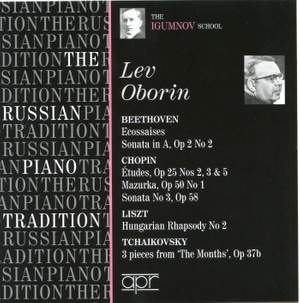 What superb if unobtrusive technique in Chopin's F minor Etude from Op 25, what grace and sparkle in the Scherzo from Beethoven's Op 2 No 2 Sonata! — Gramophone Magazine, Awards Issue 2009

Piano Sonata in A Major, Op. 2 No. 2: II. Largo appassionato

We have already featured Lev Oborin (on APR6005) playing Rachmaninov's second and third Concertos, and that he was entrusted with the first ever Soviet recordings of these works shows the status he held at that time. He studied with Igumnov at the Moscow Conservatory from the age of 14 and in 1927, at the age of 19, he won the first Chopin competition. From this time on until his death he was central to Russian musical life both as performer and teacher (he taught Vladimir Ashkenazy amongst many others). Oborin was the 'complete' pianist. He had a magnificent technique and seemed to be able to play any style of repertoire convincingly. He was also equally at home as soloist or chamber player, indeed in the West he is still perhaps better know as accompanist to the great violinist David Oistrakh due to the recordings they made together. The present CD presents Oborin as classicist in Beethoven, as the great Chopin interpreter, as virtuoso in the Liszt Rhapsody and as Russian lyricist in the Tchaikovsky. He is magnificent in all.

What superb if unobtrusive technique in Chopin's F minor Etude from Op 25, what grace and sparkle in the Scherzo from Beethoven's Op 2 No 2 Sonata!