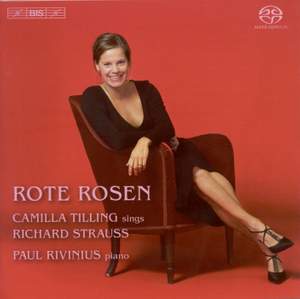 The programme interweaves familiar songs with comparative rarities such as Junghexenlied and Mein Auge. Her Ophelia Lieder, placed at the halfway mark and gleaming with aggression as well as... — The Guardian, 8th May 2009, 4 out of 5 stars More…

Richard Strauss, the great composer of symphonic poems and grand operas, wrote solo songs throughout his life: his first compositions, performed within his family circle, were songs and his setting of the poem Malven (Mallows) was to be the last piece he completed. Taking a keen interest in the possibilities and limitations of the human voice, Strauss in the solo song genre found the opportunity to try out various musical options and to discover his own individual style. But the writing of songs also served as a form of relaxation, a way of passing the time. The result is a varied spectrum of atmospheres, moods and emotions: from the jesting tone of Hat gesagt — bleibt’s nicht dabei to the heart-felt declaration of love in Cäcilie and the portrayal of madness of the Three Songs of Ophelia.

Camilla Tilling, whose successful opera career in a very short time has taken her to some of the world’s most prestigious venues — including Covent Garden, the Metropolitan, La Scala and La Monnaie — made her international breakthrough in the role of Sophie in Strauss’s Der Rosenkavalier. Ever since, Strauss’s music has held a special place for her, and on her first solo recording she has chosen to perform some of her favourites among his songs. She is partnered by the fine German pianist Paul Rivinius, with violinist Ulf Wallin making a guest appearance in Morgen!, where he plays the solo that Strauss added when making an orchestral version of the song.

Camilla recently starred in the recent production of Hansel and Gretel at the Royal Opera House, Covent Garden, to great acclaim: “But the second cast was terrific - better on points than the first, with a particularly enchanting Gretel from Camilla Tilling, who had…personal sweetness and vocal charm”. The Telegraph

The programme interweaves familiar songs with comparative rarities such as Junghexenlied and Mein Auge. Her Ophelia Lieder, placed at the halfway mark and gleaming with aggression as well as sorrow, ranks among the great Strauss performances. There's some lovely stuff elsewhere, too, all of it done with a great naturalness of expression that never turns arch.