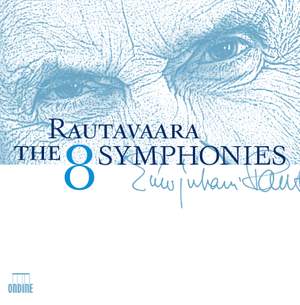 Rautavaara: Symphony No. 7 'Angel of Light'

Rautavaara: Symphony No. 8 'The Journey'

Einojuhani Rautavaara may well be the most popular symphonist alive today. On the occasion of his 80th anniversary, Ondine pays homage to its longtime ‘house composer’ by releasing the first-ever edition of the complete eight symphonies, in a special box set. Written between 1955 and 1999, the eight symphonies form a central pillar in Rautavaara's extensive artistic output and showcase the many stylistic periods in his fruitful career.They are hauntingly accessible to the listener and have proven wide audience appeal; the Seventh Symphony, ‘Angel of Light' (1994), became a best-seller and spurred Rautavaara to considerable international fame (including a Grammy nomination), leading The Philadelphia Orchestra to commission the Eighth Symphony, 'The Journey' (1999), for their centenary celebrations. These recordings have all been released by Ondine to international popular and critical acclaim, and were all produced in close collaboration with the composer. Elegant packaging, with the use of metallic colour, underlines the exclusivity of this limited edition, in combination with an attractive price.