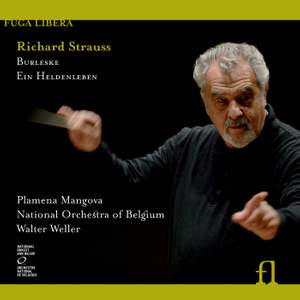 Walter Weller's father played with the Vienna Philharmonic and was a friend of Richard Strauss: he taught violin to the composer's grandson and to his own son,Walter. Later Walter aged 20, was appointed Konzertmeister and during the next 12 years, he regularly performed the Ein Heldenleben solos in concert, under Karl Böhm.After a chance substitution for Böhm, at the helm of the Vienna Phil, he launched a new career as a conductor, making many recordings for Decca. Weller was appointed director of the Belgian National Orchestra in 2006, embarking on this series of recordings with Fuga Libera.The label introduced him to the Bulgarian pianist Plamena Mangova whose ambition was to play Richard Strauss' Burleske.Weller, who often conducted the piece with Arrau and Gulda at the piano, warned the young virtuoso: "It's very difficult, we'll have to see…." but after two concert performances the project was duly launched.