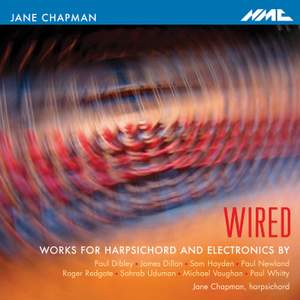 WIRED was developed by the Sonic Art Research Unit at Oxford Brookes University to explore the unique cultural resonance of the timbre of the harpsichord from its sixteenth-century origins to its appropriation by avant garde composers of the twenty-first century and the position that it occupies in this recording as a subject for experiment and transformation. The sound of the harpsichord is manipulated via various means of electronic devices and effects. “Ebows are carefully placed onto the strings activating a drone; a pedal is depressed releasing a stream of sound-files that connect, disconnect, and reconnect with the sound of the instrument; contact microphones are attached to the mechanism straining to hear the interior sound-world; the keys are depressed but no pitched sound is heard; an on rushing wall of sound; the slap of wood on wood as keys are depressed at ever increasing speeds; a line of signal processors is engaged, tweaked, disengaged, as the sound of the instrument pulses into life”. (Paul Whitty, 2008)

Jane Chapman is described as “Britain’s most progressive harpsichordist” (The Independent on Sunday) and “a fearless contemporary music performer” (The Guardian). Jane studied with Ton Koopman at the Sweelinck Conservatory in Amsterdam. She is Professor of Harpsichord at the Royal College of Music. Paul Whitty’s work has found its way into unusual spaces and contexts, including the Mecca State Bingo Hall in Kilburn, Addenbrooke’s Hospital in Cambridge, the freezer compartment of a fridge in Romford, and the traffic gyratory at Vauxhall Cross. Paul Newland is a founding member of [rout] (along with Paul Whitty and Sam Hayden) and improvising electric guitar duo exquisite corpse.