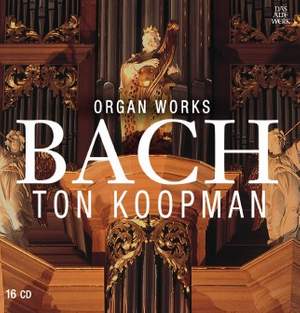 “It was delightful to be able to choose the organs myself, including two instruments upon which Bach played: the Silbermann organ in the Dom at Freiberg and the Schnitger Instrument in the Jacobi-Kirche in Hamburg. Other historic instruments in Germany and the Netherlands were chose for particular parts of the project. It was a joy to renew their acquaintance.” Ton Koopman

These quotes are all from Gramophone reviews about the discs in this set when first released individually:

"Here is Koopman on top form: here is Bach playing distinguished by its freshness, vitality and magnetism."

"Koopman has that something special. So special, in fact, that comparisons are inappropriate."

"Which brings us to the matter of comparisons. Recently I asked one famous organist whether he had any plans to join that vast throng in recording the complete Bach. His response was that something special was needed in a performer before committing Bach to disc. Koopman has that something special. So special, in fact, that comparisons are inappropriate. Marie Claire Alain (Erato) might surpass in her use of organ colour, while in terms of musicianship the towering timelessness of Helmut Walcha (on Archiv) is matchless; but while Alain’s registrations so often seem to have been deliberately contrived to achieve variety, Koopman’s serve simply to underline the essence of each Prelude (brilliantly in BWV660), and while Walcha gives each little piece ‘stature’, Koopman’s no-nonsense approach is utterly compelling."