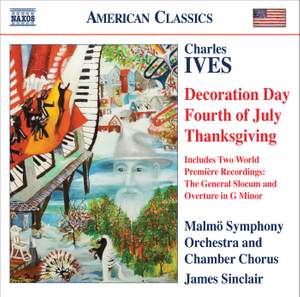 When asked to define a masterpiece in music Stravinsky chose Ives’s Decoration Day, a tone poem that Ives later made the second movement of his Holidays Symphony (its first movement, ‘Washington’s Birthday’, is available on Naxos 8559087).

The General Slocum movingly commemorates a 1904 boating disaster in which more than a thousand people lost their lives.

The sheer churning power and range of [Ives's] musical voice constantly takes the breath away...The performances by James Sinclair and the Malmö orchestra are powerfully wrought; at budget price, it's irresistible.