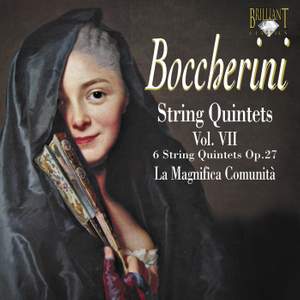 Luigi Boccherini (1743–1805) was an exact contemporary of Josef Haydn, and knew his Austrian colleague well. He also knew the younger Mozart. Although Haydn is credited with developing the String Quartet (Boccherini was himself no slouch when it came to composing quartets), and Mozart likewise with the Quintet, it is Boccherini who can lay claim to establishing the string quintet as a major chamber music form. It is his works that influenced the masterpieces by Mozart, the solitary work by Beethoven, and most importantly, the towering example by Schubert.

As a cellist, Boccherini ensured that the cello had a prominent role in the quintets (the cadenza in the trio of no.4), and especially in the almost vocal, song like writing of the slow movements. The set of six quintets on this CD were published as his opus 27 in Madrid in 1779, and are representative of Boccherini at the peak of his powers – urbane, witty, perfectly crafted, graceful and suave. The listener will easily hear why he was nicknamed ‘Mrs Haydn’ by the violinist Giuseppe Puppo – his music was considered more gentle and feminine than Haydn’s.

La Magnifica Comunità was founded in 1990, and performs a wide range of repertoire from the baroque and classical periods from sonatas to symphonies and choral works, all on period instruments