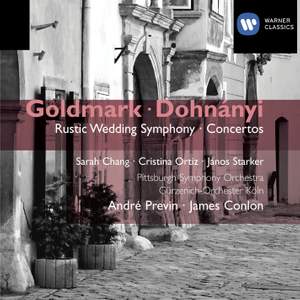 Dohnányi: Konzertstück in D major for Cello and Orchestra Op. 12

Karl Goldmark (1830-1915) was a son of a poor Jewish cantor in Keszthely, a town on the west bank of Lake Balaton in Hungary. He was sent to Vienna at the age of 14 to study and he stayed there for the rest of his life. He was a successful teacher – among his pupils for a short time was Sibelius – and this provided him the income to spend time composing. The two major works in this set, the Violin Concerto and the suite or programme symphony Rustic Wedding, date from 1877 whilst the Overture, to Aeschylus’s play Prometheus Bound, was first performed in Berlin twelve years later. The celebrated critic, Hanslick, on hearing the overture described Goldmark as a “poet of the tragic downfall”. Erno Dohnányi (1877-1960) was born in Poszony in Hungary (which is now Bratislava in Slovakia) and studied piano and composition at the Budapest Academy. At the age of 20 he began a twenty year career as a virtuoso pianist before becoming director of the Budapest Conservatory in 1919 and in 1948 he emigrated to America. Unlike his younger compatriot, Bartók, he showed little interest in folk-song and none in the advanced musical trends of the time. Both his Variations on a Nursery Song (the tune is Ah vous dirai-je, maman – on which Mozart wrote a set of variations – and is a “sister” to Baa, baa, black sheep) from 1913 and the earlier Konzertstuck show immense charm and deserve to be better known.

Dohnányi made a recording of the Variations with Royal Philharmonic Orchestra and Sir Adrian Boult four years before his death.