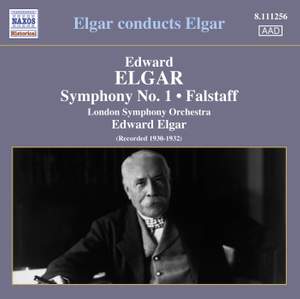 The LSO plays out of its skin for the composer; Falstaff is brilliantly characterised, the Symphony has serious intensity. Fair sound for the vintage, with some harshness in the Symphony. — BBC Music Magazine, June 2009, 5 out of 5 stars More…

King Henry V's progress - The repudiation of Falstaff, and his death

Before its sensational première in 1908, Hans Richter, the work’s dedicatee and first conductor, acclaimed Elgar’s Symphony No. 1 as ‘the greatest symphony of modern times’.

On these historic and thrillingly realized recordings, made between 1930 and 1932, there really is no match for the composer’s insight and instinctive way with his own works, especially when conducting the London Symphony Orchestra, of which he had been principal conductor from 1911 to 1913.

“Elgar’s recordings of his own music have come to be regarded as one of the great achievements of gramophone history.” MusicWeb International

The LSO plays out of its skin for the composer; Falstaff is brilliantly characterised, the Symphony has serious intensity. Fair sound for the vintage, with some harshness in the Symphony.

It’s a joy to be reintroduced to these wonderful performances — with the Violin Concerto, the summits of Elgar’s recordings of his own music. We have been living in an age of outstanding Elgar conductors — Davis (Colin and Andrew), Elder, Barenboim, Hickox, Vernon Handley, Andrew Litton, Adrian Brown — but none of them surpasses, or even quite matches, the best of the composer’s interpretations. The strong, purposeful tread of the symphony’s opening, straightforward and sublime, the subtlety of the movement’s close, the scherzo’s sheer electricity, the adagio’s astonishing fluidity (scarcely two bars are the same length) and its almost unbearable expressive intensity: these are landmarks in an Elgarian’s experience. As for the captivating Falstaff, recorded two years later, in 1932, it is hard to imagine a more brilliantly convincing reading.