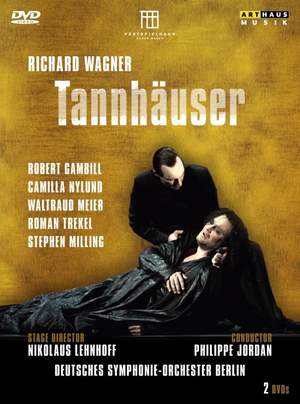 Thirty years separate these performances of Tannhäuser. The original video of the 1978 revival of Götz Friedrich's 1972 production was, we're told, 'the first complete film from Bayreuth', and... — Gramophone Classical Music Guide, 2010 More…

After Nikolaus Lehnhoff’s great success with Parsifal, Lohengrin and Tristan und Isolde this is his highly acclaimed Tannhäuser coproduced with De Nederlandse Opera and Festspielhaus Baden-Baden.

Nikolaus Lehnhoff’s production is based on the Paris version by Richard Wagner with an extended Venusberg scene and a ballet very surprisingly choreographed by Amir Hosseinpour and Jonathan Lunn. The minimalist staging and Raimund Bauer’s ingenious sets make this a Tannhäuser for our time.

The cast as always with Lehnhoff has nothing to match these days. An extra feature entitled “Tannhäuser – The Revolutionary” includes interviews with stage director, conductor and cast as well as backstage material.

"The Deutsches Symphonieorchester Berlin outdid itself under Philippe Jordan […] Camilla Nylund excelled as the chaste Elisabeth, and Ms. Meier, a musician with deep reserves of force and a gift for madness, was the perfect Venus.“ New York Times

Thirty years separate these performances of Tannhäuser. The original video of the 1978 revival of Götz Friedrich's 1972 production was, we're told, 'the first complete film from Bayreuth', and this is its first DVD release.
You're soon aware that it has not had the benefit of the latest technology: the lighting is not always well suited to the action and shifts between relatively close and relatively distant shots can appear awkward and arbitrary. The sound, too, is basic in its fixed focus, giving the voices too much prominence. All of this hardly matters, however, since the performance is electrifying, managing the difficult feat of doing justice to Wagner's inspiration without seeking to gainsay its gloriously hybrid nature.
Jürgen Rose's setting is austere, and one of the work's greatest moments, the astonishingly abrupt transition in Act 1 from the Venusberg to the idyllic countryside near the Wartburg, goes visually for too little. But the combination of Friedrich's tightly focused production and Sir Colin Davis's supremely flexible and energised conducting more than compensates. Davis is particularly in his element in the early stages of Act 2, to which he brings a Berliozian buoyancy, and what can sometimes seem almost comically tedious repetitions in the long processional chorus are anything but.
Adding to the lustre is the central trio of star performances. In 1978 Dame Gwyneth Jones was at her peak, taking time out from her definitive Bayreuth Brünnhilde to show how the roles of Venus and Elisabeth can be equally affecting, given maximum vocal and dramatic conviction.
She weeps real tears in the mime that accompanies the Prelude to Act 3, as well she might, realising perhaps that she would never be better than this. Less sympathetically filmed, Spas Wenkoff still scores with the dogged power of his singing and acting, never out of character, never off the note, while Bernd Weikl is caught at his ardent, mellifluous best. With a fine supporting cast and the Bayreuth chorus and orchestra on top form, even those who resist the stylised eroticism of John Neumeier's choreog- raphy for the Bacchanale should find this set a memorable and moving experience.
The 2008 Baden-Baden version on ArtHaus Musik is, of course, technically superior as the film of a stage performance. It is not strictly comparable with the DG release anyway, since it offers the full post-Tristan Paris version, with the extended Venusberg music, while Bayreuth uses its own favoured hybrid – the Paris Bacchanale, before the singing starts, then the original Dresden version. Performances of the full Paris version are more likely to use different sopranos for the roles of Venus and Elisabeth, and it is one of the strengths of Baden-Baden 2008 to have two such different but excellent singers in these roles. Finnish soprano Camilla Nylund is new to me, and (like the Danish bass-baritone Stephen Milling, who comes close to upstaging most of his male colleagues as the Landgraf) is clearly a singer-actor of huge potential in this repertoire.
The solo singing is the outstanding feature of this new recording. Robert Gambill might have more of the 'mad axeman' about him than Bayreuth's Spas Wenkoff, but he has immense stamina and the presence to command the stage, especially during the big ensembles. Roman Trekel is a less spontaneous Wolfram than Weikl, his voice recorded with a degree of edginess that reduces its actual lyrical beauty. As with the remastered DG, the ArtHaus sound balance favours the voices at the expense of salient orchestral detail, but this drawback is much less bothersome than certain details of the production. In a setting even more austere than Bayreuth in 1978, Nikolaus Lehnhoff seems determined to drain the work of its Christian iconography and to nudge the audience with such deliberately incongruous props as a (nonfunctioning) microphone for the contestants in the Hall of Song. The production gets off to a bad start with a robotic, anti-erotic Bacchanale, and it is here that conductor Philippe Jordan's unsteady tempi, replete with pseudo-expressive over-emphases, first become apparent. Though it recurs, this problem is less pervasive than it might be, and Jordan is an alert supporter of his singers. But it is Colin Davis who has the fuller measure of this extraordinary score.