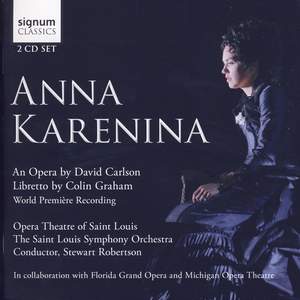 Colourful orchestration, lucid word-setting and dramatic alertness are among its virtues. — The Telegraph, 1st April 2009, 3 out of 5 stars

A sitting room in Stiva's house, That day.

Lenin's house in the country

A box at the races. Tsarskoe Selo. That afternoon.

A supper party at the Oblonsky's

Anna's apartments at an hotel. That evening.

Tolstoy's Anna Karenina is one of the masterworks of 19th century literature; a parable on the struggle for personal freedom against the conventions of a hostile society, played out in a tragic love-story. With a libretto by the distinguished director Colin Graham (veteran opera producer and director who died 3 weeks before this production was originally staged in 2007),American composer David Carlson's opera vividly captures the drama and message of the original work, with commanding performances from members of the Opera Theatre of Saint Louis. It was commissioned by Florida Grand Opera to celebrate the opening of the Ziff Opera House in Miami, and co-produced by Opera Theatre of Saint Louis and Michigan Opera Theatre.

"A great American opera has finally been written," Opera Today.

Colourful orchestration, lucid word-setting and dramatic alertness are among its virtues.