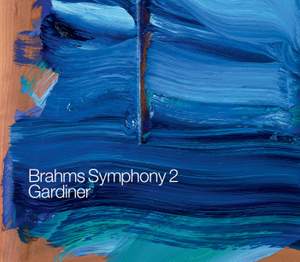 Following on from the phenomenal worldwide success of the first release in the Brahms series, SDG continues the series with Brahms’ Symphony 2 which sees John Eliot Gardiner and his Orchestre Révolutionnaire et Romantique explore the music of Johannes Brahms and of those composers that influenced him.

Brahms’ dark, deeply personal and moving Alto Rhapsody for alto solo, male chorus and orchestra is included here alongside three choral works by Franz Schubert. In Schubert’s Gesang der Geister über den Wassern D714 (1821) comparisons between the two composers could not be more clear. Brahms draws on the effective example of his beloved Schubert firstly by composing the rhapsody for male chorus and secondly, basing the work upon a poem by Goethe.

The lyrical beauty of Brahms' Second symphony makes it perhaps the most popular of the four works he composed in this form. The contrast between this symphony and the heroic First is complete, and it is strikingly analogous to the differences between Beethoven's Fifth and Sixth symphonies.

In the Second Symphony the period strings' lighter articulation gives Brahms's rhythms a sprightlier feel than in many modern sessions. …in Gesand der Geister Gardiner avoids any awkward episodic feeling by making the music tell the story of Goethe's poem fluently and with character.

Gardiner quotes Walter Frisch's report that Brahms "disliked metronomic rigidity and lack of inflection on the one hand, fussy over- determined expressivity on the other". In the first movement, he and his period instrumentalists strike exactly that balance. This is characterful music-making, complex and subtle.

Last year I made the CD of the First Symphony one of my Recordings of the Year. This latest instalment will be on the shortlist for 2009, I feel sure – unless SDG trump this particular ace by releasing Symphony 3 before the year end. One can live in hope.

[The 1st movement's opening horn theme is] played on natural horn, already outmoded by Brahms’s time...the phrase is lightly broken, in the baroque fashion. Such well-defined colours and detailed attention to articulation collide with the idea of this work as predominantly warm, relaxed and lyrical, and Gardiner sometimes scrubs perhaps a little too vigorously on the patina of inherited performance traditions. Still, he certainly provokes fresh thinking.

John Eliot Gardiner's Brahms cycle, performed across two seasons in several venues, was at pains to place the four symphonies, the German Requiem and the Alto Rhapsody in the context of music that Brahms is known to have admired, and which influenced his own works. For the disc of the Rhapsody and the Second Symphony, recorded in the Salle Pleyel, Paris, in November 2007, that context is provided by three of Schubert's male-voice choruses. Two of them are sung by the Monteverdi Choir in Brahms's own arrangements, while the most substantial, the Gesang der Geister über den Wassern, seems a direct antecedent of the writing for male voices in the Alto Rhapsody, which Natalie Stutzmann sings with gravity. The account of the symphony is impressive too - the Orchestre Révolutionnaire et Romantique sounds on more secure form than it was for the London leg of this tour - and Gardiner's swift reading is always dramatically sure footed.

John Eliot Gardiner and the ORR continue their Brahms symphonies series with this live recording of No 2, with the heartfelt Alto Rhapsody (soloist Nathalie Stutzmann) and three Schubert choruses as a bonus. Energy and meticulous phrasing truly ignite this score. Strings use limited vibrato, with judicious portamento and expressively varied bowing.

Gardiner's speeds are so relaxed that the music almost falls over. Still, they emphasise the melancholic strain in a work easily pigeonholed as a lyrical effusion. You can also enjoy the wide colour palette of the period instruments of the Orchestre Révolutionnaire et Romantique. Nathalie Stutzmann's expressive way with the Alto Rhapsody is a delight; and the Schubert items for male chorus make interesting companions.