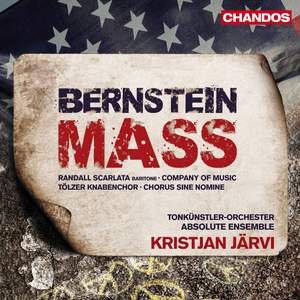 Kristjan Järvi directs his forces efficiently but his no-nonsense approach diminishes the work's endearing stylistic and emotional sprawl. …overall the feeling is that of a work being acted,... — BBC Music Magazine, March 2009, 3 out of 5 stars More…

Bernstein: Mass, I. Devotions before Mass

Trope. Half of the People (Street Chorus, Chorus)

Our Father, who art in heaven (Celebrant)

Trope. I Go On (Celebrant)

Chandos Disc of the Month – 2-CD set at mid-price

‘He was a great individual, totally unafraid to take risks and largely misunderstood because people didn’t see his universality,’ Kristjan Jarvi on Leonard Bernstein.

One of his most controversial compositions, Bernstein’s Mass was written at the request of Jacqueline Kennedy Onnassis for the opening of the John F.Kennedy Center for the Performing Arts in Washington DC and received its gala premiere at the venue’s opening on 8 September 1971. Bernstein declared that his intention in writing the piece had been ‘to communicate as directly and universally as I can a reaffirmation of faith.’ Recalling Britten’s War Requiem in its use of Catholic liturgical text interrupted with commentary, the work caused a storm of controversy particularly with its exploration of the concerns of the era – Nixon and Vietnam. Unlike Britten, however, as with many of his compositions, Bernstein brought together an embarrassment of riches of musical styles both classical and popular music at the start of the 1970s. The New York Times notes, ‘Bernstein left nothing of himself out of Mass, and like the man who wrote it, the piece demands to be noticed… beneath the original dramatic conception, the creative exuberance, the showbiz glitter and the ear-catching set numbers is a sophisticated, carefully controlled piece of musical craftsmanship that repays close scrutiny… an extravagant, exuberant and endlessly inventive creation…’ Mass is now recognised as one of the central works of Twentieth Century American music, and its political and cultural importance as well as amazing music extends its relevance to today.

The Times wrote of a recent performance by Kristjan Jarvi and the Tonkunstler Orchestra. ‘The conductor Kristjan Jarvi is bringing a bracing blast of Bernstein.’ Der Standard noted ‘… There has not been this much drama for a long time... conductor Kristjan Jarvi, together with his his Absolute Ensemble New York, the Tonkunstler Orchestra, Chorus sine nomine, Company of music and the Tolzer Boys’ Choir, presents the theme of modern man’s crisis of faith…’ ‘Kristjan Jarvi proves himself a perfect strategist with a real feeling for Bernstein’s tonal dramatisation. He creates a monumental theatre of sound …’ Kronen Zeitung.

Leading Baritone Randall Scarlata takes the role of the celebrant, a role he has performed on many occasions. He is especially recognised for his performances of American repertoire. The Boston Globe recently commented, ‘A triumph – this baritone has in his keeping the vocal wherewithal to do just about anything he wants.’

Kristjan Järvi directs his forces efficiently but his no-nonsense approach diminishes the work's endearing stylistic and emotional sprawl. …overall the feeling is that of a work being acted, rather than lived through, particularly with Randall Scarlata's over-emphatic Celebrant.

…Järvi and his celebrant Randall Scarlata are profoundly uninhibited are the instrumental playing - whether evoking Sousa, edgy rock or free jazz-like liberation - is proudly physical, and locks into whichever idiom Bernstein demands in the moment with horse-sure certainty.

It's a tour de force for conductor Kristjan Järvi, who, in addition to marshalling the enormous forces required - three choirs, two orchestras, soloists and a rock band - takes a speaking role as one of the cynics hounding Randall Scarlata's volatile Celebrant. Engineered over a colossal dynamic range, the sound is sensational.