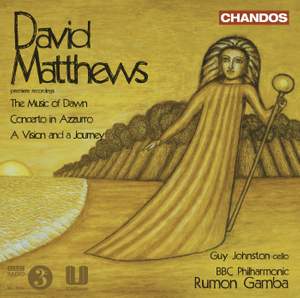 The music speaks so directly and involving that you're caught up in it from the start. …A Vision and a Journey lives up to its title impressively: taking Sibelius as an inspiration… was clearly... — BBC Music Magazine, June 2009, 4 out of 5 stars More…

‘The reputation of David Matthews has risen steadily over the last few years… among his contemporaries he has few rivals in the creating and sustaining of larger forms.’ International Record Review

Born in 1943 in London, Matthews was first attracted to the idea of becoming a composer only in his teens, and initially was self-taught. After university, he had formal lessons with Anthony Milner, and worked in Aldeburgh as Benjamin Britten’s assistant. His music represents a continuation of, rather than a challenge to, the great tradition of British music in the twentieth century placing a strong emphasis on melodic lines and on what has been called ‘a Romantic generosity of expression.’ At the same time, it is by no means straightforwardly conservative; it speaks in a highly individual voice; and one that is still evolving. The Times wrote recently ‘Matthews is among our most conspicuous symphonists, as well as among our stalwart adherents of tonality.’ Chandos adds this very-English composer to the bastion of English composers already represented on the label.

The BBC Philharmonic and Rumon Gamba showcase three of his symphonic poems: The Music of Dawn, A Vision and a Journey, and the cello concerto, Concerto in Azzuro, performed by Musician of the Year award winner, Guy Johnston. All receive their premiere recording.

The Music of Dawn was inspired by the painting, of the same name, by British artist, Cecil Collins and used as the artwork this release. Matthews recalls, ‘I regard him as one of the most important painters of the twentieth century. I was particularly struck by the painting called ‘The Music of Dawn’. It immediately suggested music as, from its title it was obviously intended to do. Cecil Collins was the most musical of painters, and I hope that he would have liked the idea of his painting being evoked in the medium of orchestral sound.’ Richly scored for large orchestra the work is an evocation of the sun, beginning in the pale light of early dawn, and ending in the blaze of noon. The majority of the work was composed at Norman Del Mar’s house in Cornwall.

Both A Vision and a Journey and Concerto in Azzurro were commissioned by the BBC. The ‘symphonic fantasia’ A Vision and a Journey was first performed by the BBC Philharmonic in 1993. Concerto in Azzurro is composed as a single large-scale movement, lasting just under 25 minutes. It derives from the first movement of Bruckner’s Ninth Symphony and a holiday spent on the Island of Lundy, and a vision of blueness found there.

Peter Marchbank of the Guardian wrote recently of David Matthews, ‘The lyricism shines out and one is instantly aware that this is music by a composer who is very much a part of the great English tradition.’

The music speaks so directly and involving that you're caught up in it from the start. …A Vision and a Journey lives up to its title impressively: taking Sibelius as an inspiration… was clearly no bad thing. Strong persuasive performances, especially from Guy Johnston in the Concerto, are caught in exemplary sound.

Of these three orchestral works, only one – AVision and a Journey – is termed a 'symphonic fantasy'. Yet The Music of Dawn and Concerto inAzzurro could also be similarly described. They too rely on flexibly organised single-movement structures that display strong and positive links with the great 19th-century tradition of the programme symphony and tone-poem.
The earliest of the three, The Music of Dawn, is a richly scored response to a painting by Cecil Collins that makes no bones about sharing its musical imagery with other representations of sunrise and the sense of new beginnings – by Wagner, Strauss, Ravel, Schoenberg – but in a spirit of homage rather than dependency, creating something distinctive out of the contrasts between dance-like exuberance and soulful lyricism, and always with a personal angle on what in other contexts might be heard as explicit allusions to earlier models.
A Vision and a Journey reinforces the aspirational theme, suggesting a kind of pilgrim's progress, or hero's life, as it travels through well defined stages of fervent, at times rhapsodic questing. There are brief hints of Tippett in the string writing, but the heritage represented by such ultra-Romantic composers as Bax and Bantock is not spurned either, in a dramatic and engaging fantasia which is all the more effective for its imaginative way with some very simple basic ideas.
Concerto in Azzurro – 'concerto in blue' – is another evocation of light, sky, and an underlying sense of the transcendent. Although its insistent rhythmic and melodic patterns risk earnestness now and again, the concerto builds persuasively to a marvellously understated, touchingly poetic ending. Guy Johnston is a technically immaculate soloist, while Rumon Gamba with the BBC Philharmonic are excellent throughout in first-rate recordings.

A welcome disc shines light on David Matthews's rhapsodic, fantastic music. Guy Johnstonis a technically immaculate soloist, while Ruman Gamba with the BBC Philharmonic are excellent throughout in first-rate recordings.