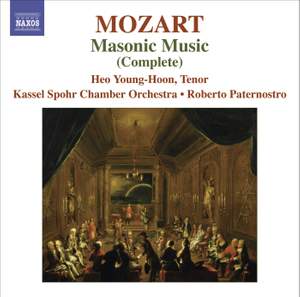 During his seven years as a Mason, and in addition to the incidental music for Thamos, King of Egypt and The Magic Flute, which abound in Masonic symbolism, Brother Mozart adapted or newly composed a number of works for his fraternity, some of which are still used in Masonic ceremonies.

Among the vocal and instrumental pieces on this disc is Laut verkünde unsre Freude, K.623, a cantata which Mozart conducted at the dedication of his Lodge’s new temple less than three weeks before his tragic death.

This disc comprises the complete Masonic music by Mozart, both vocal and orchestral.

Roberto Paternostro…encourages the hard-working Kassel stings (cellos and double bass well to the fore) to a notably brusque, angry performance of the C minor Fugue. The chorus sings with aptly robust enthusiasm; and Heo Yong-Hoon fields a pleasing, compact tenor...

This disc gathers together the music Mozart wrote for performance at his Masonic lodge in Vienna following his admission in 1784. The material ranges from lodge songs to ceremonial pieces to shortish but full-blown cantatas. Some of the music is constrained by its functionality, but none is negligible and all is characterised by Mozart's commitment to the order's ideology. The familiar Masonic Funeral Music remains the towering masterpiece, though the gnarled-sounding Adagio and Fugue in C minor is almost its equal in its depiction of spiritual struggle. The most curious work is probably Die Ihr Des Unermesslichen Weltalls Schöpfer Ehrt, a cantata for tenor and piano that now strikes us as almost new-agey in its assertion that all religions derive from a single spiritual source. Conducted by Roberto Paternostro, the performances are uneven: the Funeral Music, taken far too briskly, comes off worst. The choral singing is superb, the playing scrupulous rather than committed. Korean tenor Heo Young-Hoon, exuberantly operatic in the cantatas, is less engaged and imaginative when it comes to the songs.