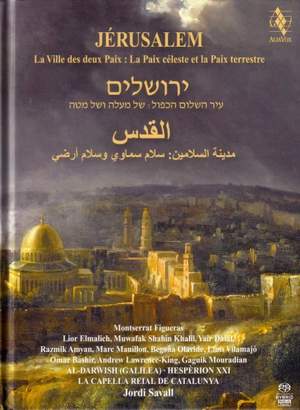 City of the two peaces: Heavenly peace and Earthly peace

…that Sarajevan chant lies at the wounded heart of this whole brilliant enterprise. Sung with just the faintest hint of vibrato by Montserrat Figueras, it segues into a haunting Palestinian... — BBC Music Magazine, March 2009, 5 out of 5 stars More…

trad.: Stavrotheotokia (Hymn To The Virgin At The Foot Of The Cross)

trad.: The Koran, Sura XVII, 1- Mohammed Ascends To Heaven From The Temple Mount

trad.: Danse Of The Soma

trad.: A Plea For Peace In Arabic

trad.: A Plea For Peace In Armenian

trad.: Final Fanfare “Against The Barriers Of The Spirit”

Jordi Savall creates an homage to the city of Jerusalem through an evocation of its rich history of more than 3000 years, bringing together Jewish and Palestinian musicians as well as performers from Iraq, Armenia, Turkey, Morocco and Syria.

A hommage to Jerusalem and an invocation to peace

"This project was conceived as a hommage to Jerusalem, the city endlessly built and destroyed by man in his quest for the sacred and for spiritual power. Through the power of music and words, this fruit of the passionate and committed collaboration of musicians, poets, researchers, writers and historians from 14 nations, as well as Alia Vox and the CIMA Foundation teams, has become a fervent invocation to Peace. A Peace born out of a dialogue based on empathy and mutual respect is, despite the enormous difficulties involved, a necessary and desirable path forward for all concerned. It is a goal that is both urgent and imperative, one which can help humanity to overcome its ancestral fears and follies, thus preventing countless innocent victims and untold futile siffering. Jerusalem is more than a holy city: it is a symbol for mankind, continuing to remind us all in this 21st century of the great difficulty in living together. Without peace, no human life is possible." Montserrat Figueras and Jordi Savall, Unesco ‘Artists for Peace’, Bellaterra, Autumn 2008

…that Sarajevan chant lies at the wounded heart of this whole brilliant enterprise. Sung with just the faintest hint of vibrato by Montserrat Figueras, it segues into a haunting Palestinian lament by Mufawak Shahin Khalil, which is followed by an Armenian lament by Razmik Amyan, after which we hear the awe-inspiring cadences of Auschwitz survivor Shlomo Katz. Recorded in 1950, this chant for the victims of Nazism has no whiff of vengefulness: like the whole of this majestic interfaith enterprise, it is quite simply an affirmation of humanity.

A lot of care has been taken in the historical shape, the repertoire and the artists - it's a territory where early music and world music meet to create beautiful and powerful performances.

Using a kaleidoscopic blend of musicians, Savall takes the listener on a pilgrimage through time and space. The emphasis on slow-burning chants creates a sense of claustrophobia at times, but the sheer ambition of the project is little short of breathtaking.

Jerusalem may not bring world peace any closer, but you’ll never read the Gaza headlines in quite the same way again.