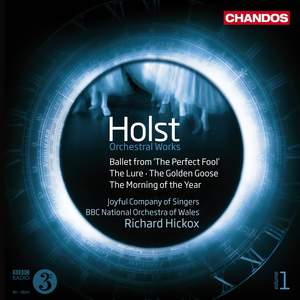 The only other recording of these ballets [The Golden Goose, The Morning of the Year] apart from ones of Imogen Holst's collations - is Hilary Davan Wetton's for Hyperion (1995), coupled with... — BBC Music Magazine, February 2009, 4 out of 5 stars More…

I. Sound of drum and trumpets play

V. Dance of the Three Girls

I. I am that which men did make

II. Dance of Headman and Hobby-horse

VI. Dance of the Youngest Couple

The first disc of what was projected to be a cycle, cut tragically short by the recent death of Richard Hickox, one of the foremost exponents of British music.

The Planets is at the heart of the English repertoire, yet much of Holst’s orchestral output is unjustly neglected. This series will demonstrate that Holst was a composer of great inventiveness. Volume 1 offers three rarely recorded works, the ballets The Lure (its first time to CD), The Golden Goose and The Morning of the Year, alongside the more familiar Ballet from the one-act opera The Perfect Fool, long recognised as one of Holst’s most successful small-scale works.

The Golden Goose and The Morning of the Year are known as ‘choral ballets’. The Golden Goose was composed for Morley College, where Holst had been Director of Music since 1907, and was intended for amateurs. The ballet is based on the Grimms’ fairy tale of the Princess who had never been able to laugh. The Morning of the Year was the first work to be commissioned by the BBC Music Department, and so is an altogether more serious affair and dedicated to the English Folk Dance Society. This is one of Holst’s most impressive fusions of folk music with his own style, and has no need of the stage to make its full impact.

The Lure shares some of the same origins with the Perfect Fool ballet. The music was written in 1918 as incidental music for a play called The Sneezing Charm by Clifford Bax but at the time it was performed neither as a ballet nor as an orchestral piece. Frustrated by the lack of performance, Holst eventually withdrew the work from his list of compositions. Based on a Northumbrian folk tune, it is lively and powerful, and typical of the composer.

Holst had no desire to be predictable and if he has sometimes seemed to be eclipsed by his more gifted contemporaries he remains one of the most original and innovative musicians of the past century. This recorded survey is sure to shine new light on his neglected works and introduce a new audience to his orchestral music.

The only other recording of these ballets [The Golden Goose, The Morning of the Year] apart from ones of Imogen Holst's collations - is Hilary Davan Wetton's for Hyperion (1995), coupled with the much earlier and less inspiring choral ballard King Estmere. Hickos makes much the better case for them, with more spacious and lively conducting, fine playing and a more focused and animated chorus.

Though our modern age continues to extol ThePlanets as most archetypal of its composer, this recording of music written and completed during the 1920s serves only to reiterate that Holst's musical purview was much broader, and while he never enjoyed recognition for his ballet music (with the exception perhaps of The Perfect Fool as an orchestral suite), his originality rarely faltered.
All the works featured here – a 'must' for all Holst fans – reveal how he built steadily on the experimental paradigms of The Planets with an orchestral technique second-to-none, 'naked' (as Vaughan Williams once described) in its exposed, gossamer textures.
Holst's distinctive sound is carefully manicured in this recording; the rapid 'mercurial' passages of string- and wind-writing of The PerfectFool are delivered with exemplary crispness and vitality; the superimposed fourth harmonies of the unfamiliar The Lure, which develop mysterious bitonal 'saturnine' textures, look forward to the composer's unaccompanied choral masterpiece The Evening Watch as well as the desolate landscape of Egdon Heath, while the two choral ballets, The Golden Goose and The Morningof the Year (the former being weaker in quality) ebb and flow between Jovian elation and the more bizarre neo-classicism hinted at in 'Uranus' and the strange modernist textures of the later Choral Fantasia. Hickox certainly brings an electric appeal to these little-known, pointillistic scores as does the more finely tuned sense of ensemble between mystical voices and orchestra.
Perhaps the most compelling item on this disc, however, is The Lure which gives us a 'reworking' of The Perfect Fool but with a different climactic outcome derived from the warmer timbres and harmonies of the Ode to Death.

Holst's distinctive sound is carefully manicured in this recording; the rapid "mercurial" passages of string-and wind-writing of The Perfect Fool are delivered with exemplary crispness and vitality…