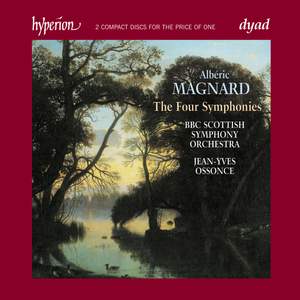 there is a quiet and distinctive personality here, and dignity too. The superb Hyperion set of these four symphonies, neatly fitting onto two inexpensive CDs, easily outshines earlier rivals,... — Penguin Guide, 2011 edition More…

Albéric Magnard really is the great so-far-undiscovered master of French music. Born in 1865 (the same year as Sibelius, Nielsen and Glazunov), the son of the managing editor of Le Figaro, his reticent personality prevented him from courting fame or even performances of his music. But he wrote two operas, chamber music, and four wonderful symphonies unsurpassed by any other French composer of his time. His end was tragic: in 1914, defending his estate in Normandy, he was shot dead by German soldiers who then burned his house down, destroying many manuscripts (including one of the operas mentioned above which is now lost for ever). His four-movement symphonies are substantial in length, cyclic in character, serious, attractively scored, slightly melancholic, and well worth getting to know.

‘The works are insinuating. I keep wanting to come back for more. Another Hyperion success’ (Classic CD)

‘A set of performances which brings this music alive in a way that it can rarely have enjoyed since its composition. Something of a discovery then, which will hopefully lead to a further interest in an endlessly fascinating composer’ (Hi-Fi News)

there is a quiet and distinctive personality here, and dignity too. The superb Hyperion set of these four symphonies, neatly fitting onto two inexpensive CDs, easily outshines earlier rivals, with warm, cleanly focused sound.