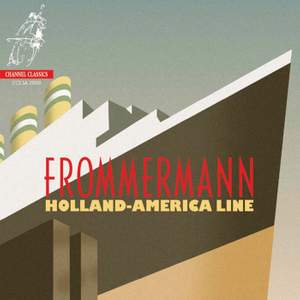 Music from the 30's and 40's From America and Holland

Ellington: It don't mean a thing (if it ain't got that swing)

Doris Fisher: Into each life some rain must fall

Arthur Altman: The flatter the plate

Russ Morgan: Does your heart beat for me

American and Dutch evergreens originally performed by groups such as Johnny en Jones, The Ink Spots, The Mills Brothers, The Ramblers and Duke Ellington in new arrangements by leading Dutch composers.

The Dutch group Frommermann is named after Harry Frommermann, who in 1927 founded the Comedian Harmonists. This German ensemble, comprised of five singers and a pianist, was a huge sensation in the late twenties and early thirties of the last century.

The Comedian Harmonists were namely renowned for their broad variety of vocal styles and the fine sense of comedy with which they performed close harmony music. Within a short period they became international celebrities with concerts in Europe and the United States. In 1935 the Comedian Harmonists were forced by the Nazis to disband, silencing this ensemble for eternity.

After the breakup of the Comedian Harmonists, Harry Frommermann departed for the United States. In emulation of its namesake, the ensemble Frommermann now dares to make the Great Crossing: the project ‘Holland-America Line’ is dedicated to American and Dutch music of the 1930s and 1940s. In the same manner as the Comedian Harmonists, they offer a wide range of musical styles; all the pieces are especially arranged for the Frommermann ensemble, with - for this program - the addition of a guitar.