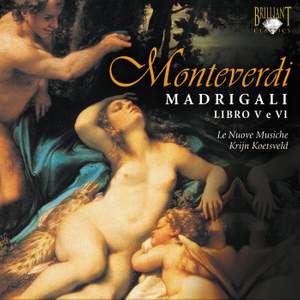 In the 16th century madrigals were all the rage, and the country where the genre was perfected was Italy. The motet had reached Italy from the Netherlands and France during the previous 200 years, and had been infused with the ‘new’ polyphonic style of composition. Italy was also the country that had produced the greatest poetry of the Renaissance, including Petrach and Tasso.

The fusion of music and this wonderful poetry inspired many of the great Italian composersof the period such as Caccini, and most importantly Monteverdi.

The madrigals of Claudio Monteverdi represent the final development of the form and are without doubt the greatest examples. He composed eight books between 1585 and 1635. They are composed for a small vocal ensemble of five voices, with harpsichord and theorbo (a large lute) continuo.

Monteverdi’s genius as a composer of opera can be heard in the drama he creates in these madrigals. They can be described with some justification as mini operas.

Le Nuova Musiche was formed in 2004 and specialises in music from the first half of the 17th century. The members of the group are not only first class musicians, but have the benefit of in depth knowledge of the performing practices and manuscripts of the repertoire.