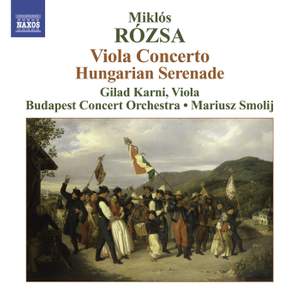 Rósza's… Viola Concerto composed in 1979 for the young Pinchas Zuckerman, is perhaps his finest work altogether, a brooding, passionate and eventually enlivening utterance that deserves to stand... — BBC Music Magazine, February 2009, 5 out of 5 stars More…

The spirit of his native Hungary is seldom far away from the concert music of Miklós Rózsa, in spite of some 55 years spent in Hollywood and his long association with music for the cinema.

His Viola Concerto, the later of the two works presented here, was written in 1979 – at the request of Piatigorsky for the young Pinchas Zuckerman, who gave its first performance – and brings with it a certain astringency reminiscent of Bartók rather than Kodály.

Rósza's… Viola Concerto composed in 1979 for the young Pinchas Zuckerman, is perhaps his finest work altogether, a brooding, passionate and eventually enlivening utterance that deserves to stand with the Walton and Bartók concertos and Bloch's Viola Suite. There was an excellent version from Paul Silverthorne and the NZSO on Koch International, but though Gilad Karni is rather close-miked here I prefer his account, both more intimate and earthier, authentically Hungarian and more sombre in colouring.

The recording industry's sustained interest in Rózsa's concert music is heartening and this new disc from Naxos is its latest manifestation. Both works exhibit fully the strengths and appeal of the composer's output as a whole, from its impeccable craftsmanship to its lilting Hungarian accent. The personal voice – close stylistically at times to Kodály and Bartók – is recognisably that of the film composer whose music graced the silver screen for so long.
The Hungarian Serenade started life in the early 1930s as his Op 10 for strings but Ernö von Dohnányi persuaded the young composer to recast it for a larger orchestra with a punchier finale. The work underwent several further revisions before emerging as the work given here.
It's is high-quality light music and is superbly played here.
Gilad Karni's ardent interpretation of the Viola Concerto is especially welcome. A fine player and former Lionel Tertis Competition prize-winner, Karni audibly relishes the work's dark colours and rich writing. The Concerto had a difficult genesis (for Rózsa), taking four years to complete with several interruptions by film work which the composer later claimed ruined the flow. Yet the finished result does not betray this, its four movements holding together as if written in a single burst of inspiration.
Karni proves a fine advocate and the Budapest orchestra provide excellent support.