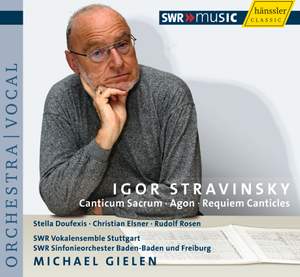 The biggest challenge is surmounted in Canticum Sacrum, a work conceived for the ample acoustics of St Marks Church in Venice. In this performance its austere beauty and grandeur really come... — BBC Music Magazine, June 2009, 5 out of 5 stars More…

Michael Gielen proves once again that he is one of the masters of the 20th century repertoire. Both orchestra and conductor have established themselves among the most fluid and sensitive interpreters of 20th century music and here they are joined by the astonishingly virtuoso Vocal Ensemble Stuttgart in definitive performances of Stravinsky’s late choral works.

The biggest challenge is surmounted in Canticum Sacrum, a work conceived for the ample acoustics of St Marks Church in Venice. In this performance its austere beauty and grandeur really come to life, aided by the outstanding choral contribution from the SWR Vocal Ensemble and an atmospheric recording. The most immediately accessible piece here is undoubtedly the ballet Agon. ...Gielen's subtle balancing of textures and his impeccable pacing of the contrasting movements, not to mention the responsive playing of the orchestra, brings immense rewards.

Rarely has late, gnomic Requiem Canticles sounded so fluent, from the extraordinary prelude (a fast, nervous pulsing with string lines crossing each other), through the taut drama of the 'Dies irae' to the second interlude (so reminiscent of the Symphonies of Wind Instruments) and the chiming finale, where ritual bells are enacted by celesta, glockenspiel and vibraphone, a distant recollection of Les noces. This was Stravinsky's last major composition and although it plays for barely a quarter of an hour seems fully to justify that dodecaphonic route that so many at the time had criticised him for taking.
The marginally more expansive and noticeably more austere Canticum sacrum marked the composer's return to the Russian Orthodox faith and calls on the unique combination (unique to Stravinsky that is) of flute, three oboes and bassoons, four trumpets and trombones, harp, violas, basses and organ, in addition to the voices.
Again Michael Gielen drives a confident course through a work that brooks no compromise and culminates in a harshly oratorical 'Illi autem profectae', one of the most striking episodes in all late Stravinsky.
The ballet Agon post-dates Canticum sacrum, just, and employs an even wider array of instruments, all of them used with the greatest economy and expressive force, the distinctive and rhythmically alluring interlude/prelude, a recurring motif, connecting a series of brief but terse and mostly outspoken dance movements...The recordings are both airy and admirably clear.

Pungent and absorbing performances of three late Stravinsky scores. I can't recall ever having enjoyed a recording of the late, gnomic Requiem Canticles quite as much as this one: certainly no performance in my experience has sounded as fluent… Agon is pure aural sculpture, angular and uncompromising... but in a performance such as this that focuses its every pungent detail makes for an alluring and stimulating listen.

Agon provides a wonderful contrast, with its appropriation of baroque dance forms, generous rhythmic and melodic invention, and constantly varied orchestration, all of which Michael Gielen and his Freiburg-based orchestra audibly relish. All three are very fine performances, and provide as good an introduction to the world of late Stravinsky as any currently available on disc.