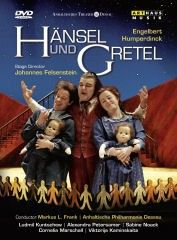 Johannes Felsenstein's production of this favourite fairy-tale opera presents it with every sinister element removed. In Stefan Rieckhoff's sets and costumes, the children remain in a home setting…... — Gramophone Magazine, May 2009 More…

Hänsel und Gretel is a fairy-tale opera (Märchenspiel) by Engelbert Humperdinck to a libretto by his sister Adelheid Wette. The idea for the opera was proposed to Humperdinck by his sister, who approached him about writing music for songs that she had written for her children for Christmas based on „Hänsel and Gretel.“ After several revisions, the musical sketches and the songs were turned into a full-scale opera.

Hänsel und Gretel has been associated with Christmas since its earliest performances, and it is often performed at Christmas time. It is much admired for its folk music-inspired themes, one of the most famous being the prayer from act II. A family classic, it grew out of a set of incidental music and, written between 1890 and 1893, it was fi rst performed on 23 December 1893 under Richard Strauss in Weimar. The form in which the story is used in the opera derives from the collection of Ludwig Bechstein. Gertrud, the desperate mother, sends her hungry children into the wood to pick strawberries, unaware of the danger to which she exposes them until Peter, the broombinder, returns and is shocked at what she has done; both anxious parents immediately set out to fi nd them. The thoroughly happy ending introduces another signifi cant variation to the familiar version of the brothers J. and W. Grimm.

“Markus L. Frank and the Anhalt Philharmonic bring out the truly magical yearning in Humperdinck’s music so beautifully that this alone should be enough to draw audiences to the Anhalt Theatre.” Mitteldeutsche Zeitung

Johannes Felsenstein's production of this favourite fairy-tale opera presents it with every sinister element removed. In Stefan Rieckhoff's sets and costumes, the children remain in a home setting… while their father, taken by Ludmil Kuntschew, plays the witch as an amiable, totally benevolent figure, not sinister at all, even joining them in the final joyful ensemble. When they sing that the witch is dead, you find that the production contradicts that completely. That said, it is a strong and capable performance, very well conducted and with a cast of good if not outstanding singers.