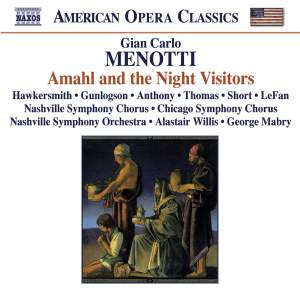 Menotti - Amahl and the Night Visitors

Oh, Mother, you should go out and see! (Amahl, Mother)

Poor Amahl! Hunger has gone to your head (Mother)

Are you a real king? (Amahl, King Balthazar, King Kaspar)

This is my box (King Kaspar)

Amahl, I told you not to be a nuisance! (Mother, Amadl)

All that gold! (Mother)

Oh, woman, you may keep the gold (King Melchior)

Oh, no, wait… take back your gold! (Mother, Amahl)

Menotti’s Amahl and the Night Visitors, the first opera written for television, enjoys more than five hundred performances annually around the world and is immensely popular with amateur groups.

A crippled boy, Amahl, and his mother are visited by the three Kings who seek the newborn Jesus. Deciding to give his crutch to the Christ child, he is miraculously healed, and joyfully accompanies the Kings to give thanks.

Sung in English, brimming with tuneful melodies for both soloists and chorus, the opera is a humorous and poignant Christmas classic beloved by people of all ages.

Amahl and the Night Visitors is a perennial Christmas classic that has little competition on CD. There is no recorded competition for My Christmas.

“Only one of Menotti’s operas can truly be said to have achieved lasting popularity: “Amahl and the Night Visitors,” a brief, modest work created for NBC television and first performed in a live broadcast on Christmas Eve in 1951…..The work’s appeal is obvious. Menotti’s music is attractive and unfailingly lyrical.” The New York Times