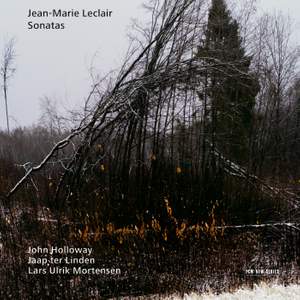 Holloway and his experienced continuo players relish the pleasing combination of Italian brilliance with French melodic grace. Of particular charm are the movements marked 'Aria': these singable... — BBC Music Magazine, February 2009, 4 out of 5 stars More…

Jean-Marie Leclair I: Troisième Livre de Sonates Op.5 / Sonata I in A Major

Following his acclaimed ECM recordings of sonatas by Biber, Schmelzer and Veracini and his no less lauded rendering of the complete unaccompanied Sonatas and Partitas by Bach two years ago, English baroque violinist John Holloway once again joins forces with his excellent partners Dutch cellist Jaap ter Linden and Danish harpsichordist Lars Ulrik Mortensen for an album of strikingly beautiful, yet little known chamber music from the baroque era.

Jean-Marie Leclair (1697-1764), who laid the foundations for the French violin school, was a particularly interesting figure. He trained as a dancer, lacemaker, violinist and composer and was active in several European cities such as Torino, Lyons, Paris, Amsterdam and Kassel. He was murdered in Paris under never fully detected circumstances. As a composer he was a master of mixed styles, providing a rare synthesis of Italian and French traits, of melodic beauty and dancelike vivacity. John Holloway has chosen sonatas from his “classical” period – a selection from the Troisième Livre de Sonates, op 5 – in which Leclair had gained a perfect balance of proportion, lightness, expressiveness, contrapuntal art and virtuosic display.

The sixth recording for ECM by John Holloway, it was made at the monastery of Sankt Gerold in the Austrian Alps. More information on the violinist can be found at www.johnholloway.org.

Holloway and his experienced continuo players relish the pleasing combination of Italian brilliance with French melodic grace. Of particular charm are the movements marked 'Aria': these singable and dance-like pieces, sometimes wistful and a little melancholy, as in that belonging to the A major Sonata, are played with delicacy and restraint.

Choosing five sonatas from what he believes to be Leclair's finest collection, and, along with his colleagues, performing them with deep understanding and expressive finesse, John Holloway makes a persuasive case for the French violinist as a major figure of 18th-century music. The concluding "Chaconna" of Sonata No 4, with its elaborate independent cello part, comes as the climactive point of this spirited interchange. All three players captured unerringly each movement's rhetorical style, and are sensitive to the many expressive details of harmony and melody, while remaining natural and unaffected. Holloway's violin rings out sweetly, especially in the higher register, his playing a model of the selective use of vibrato for expressive effect.