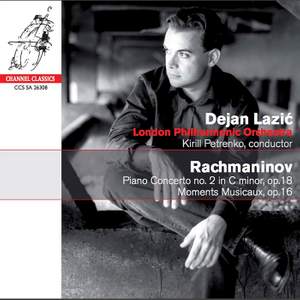 …Lazic's bland treatment of the famous opening bars… belies the character of the rest of the performance: the build to the first movement's climax is impressively handled… and the second and... — Gramophone Magazine, February 2009 More…

Although they were separated due to a period of creative despair which interrupted his work, both the second Piano Concerto and the Moments Musicaux date from Rachmaninov’s early period, during which he was active primarily as a composer rather than a pianist. This explains the character of the second Piano Concerto, which partakes of both chamber music and symphony, despite the dazzling virtuosity of the solo piano part.

Pianist Dejan Lazic was born in Zagreb, Croatia, and grew up in Salzburg where he studied at the ‘Mozarteum’. He is quickly establishing a reputation worldwide as “a brilliant pianist and a gifted musician full of ideas and able to project them persuasively” (Gramophone). The New York Times hailed his performance as “full of poetic, shapely phrasing and vivid dynamic effects that made this music sound fresh, spontaneous and impassioned”. After his recent, highly successful Edinburgh Festival recital, The Scotsman wrote: “Dejan Lazic shines like a new star”. As recitalist and soloist with orchestra, he has appeared at major venues and at numerous international festivals across Europe, North and South America, Asia, and Australia. Alongside his solo career, Dejan Lazic is also a passionate chamber musician and active as a composer. The London Philharmonic Orchestra was founded in 1932 by Sir Thomas Beecham and is recognised as one of the world’s great orchestras. The young conductor Kirill Petrenko, hails from Omsk via Austria and appointments in Meiningen and at the Komische Oper Berlin, confirms his concern for clarity and vividness in this recording as a guest conductor of the LPO.

…Lazic's bland treatment of the famous opening bars… belies the character of the rest of the performance: the build to the first movement's climax is impressively handled… and the second and third movements are played with sensitivity and spirit. The six Moments musicaux... contain arguably the finest of Rachmaninov's keyboard music from the 19th century. ...Lazic offers some quietly unaffected playing of the odd-numbered pieces, and storms through the virtuoso even-numbers...