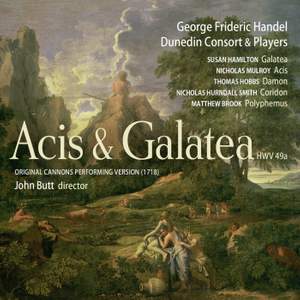 The chief strength of this account lied in the excellent instrumental playing (the recorders that form the 'warbling choir' addressed in Galatea's first aria are sheer magic)… — BBC Music Magazine, January 2009, 3 out of 5 stars More…

XVII. 17. Air. Cease to Beauty to Be Suing (Polyphemus)

XVIII. 18. Would You Gain the Tender Creature (Coridon)

XXVI. 26. Solo and Chorus. Must I Acis Still Bemoan (Galatea)

Acis and Galatea is the Dunedin Consort's second Handel recording and follows their hugely successful 1742 version of Messiah, which earned the group a Classic FM Gramophone Award for "Best Baroque Vocal Album" in 2007 and a Midem Award in 2008.

The Dunedin Consort continues its critically acclaimed practice of recording unusual but authentic recording versions of well-known works; Acis and Galatea is no exception. The Consort has recorded the Original Cannons Performing Version from 1718.

There are notable differences in the Cannons version including changes in instrumentation and vocal scoring (there is no alto line) made by Handel to suit the forces at Cannons. This includes one-to-a-part choruses, in a similar manner to the choruses in the Consort’s Matthew Passion recording.

Director John Butt chose this version because of the small forces involved (which was one of the aspects that made Messiah so distinctive) and although there have been 'first versions' of Acis recorded before, Butt felt that there were certain aspects of the original version that had not yet been sufficiently realised.

Acis and Galatea is a beautiful pastoral entertainment, Handel's first dramatic work in English, with a simple yet highly emotional story that encompasses the extremes of love and tragedy.

In 2007, the Dunedin Consort’s tenth anniversary year, the group reached a new level of critical acclaim, culminating in the Classic FM Gramophone Award for Messiah in the Baroque Vocal category. This is the only such award presented to a Scottish group in recent years (and the first to an ensemble that is not a Scottish National Company or BBC orchestra) and now gives the Dunedin Consort a truly international reputation.

“A genuine sparkle which lifts Handel's music above the ordinary, and a fresh angle for just about every moment.” The Scotsman

Handel's Acis and Galatea has been recorded often, but the original version written for smallscale performance by only five singers (soprano, three tenors and bass) and a small band at Cannons in 1718 has almost never been properly revived. This beggars belief because the Cannons version text makes more dramatic sense and the musical scale of it is charming. It is certainly among Handel's most perfect creations.
Thankfully, John Butt has researched the performing conditions and text of the Cannons Acis.
The philological aspects of the Dunedin Consort & Players' new recording are impeccable, and, better still, the performance is utterly magical.
The Sinfonia brims with unforced personality, after which the pastoral chorus 'O the pleasure of the plains' is relaxed, with the oboes given enough space to weave their imitative lines clearly. The five singers and the band are beautifully in proportion with each other, and Linn's sound recording is stunningly good. Susan Hamilton's light, articulate soprano is preferable to an operatic voice in the role of Galatea.
Nicholas Mulroy's Acis is resonant and suave, combining muscularity with elegance. The madrigal-like beauty of 'Wretched lovers' is breathtaking: the blend and understanding between the five singers is deeply satisfying, and the menacing music to convey the arrival of Polyphemus is astutely integrated. Matthew Brook's Polyphemus is extrovert, powerful and amusing, but also arouses pity and tenderness from the listener in 'I rage, I melt, I burn'. The dialogue between the hapless would-be seducer and the disgusted Galatea is superbly enacted by Brook and Hamilton. The roles of Damon and Coridon are admirably sung by Nicholas Hurndall Smith and Thomas Hobbs.
Butt's direction from the harpsichord is a role model of taste and style, and he insightfully conveys the elusive changing tone of the story from pastoral romp into personal tragedy. Previous versions of merit still possess enduring appeal, but it seems to me that the Dunedins have transformed the way in which we can understand and enjoy Handel's lovely early English masterpiece.

…the performance is utterly magical. The five singers and the band are beautifully in proportion with each other, an Linn's sound recording is stunningly good.

a wonderfully intimate reading, which bounces along with the spring and precision of a chamber performance. There is some world-class singing here: Susan Hamilton portrays Galatea with startling clarity and sincerity; Nicholas Mulroy makes an affecting Acis and the tremendous Matthew Brook combines power and pathos as Polyphemus.