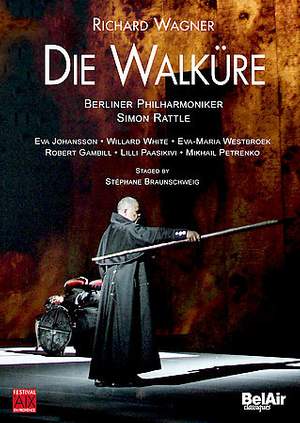 In a career spanning more than 30 years, Sir Simon Rattle has distinguished himself through his long-term relationships with a number of orchestras, wide-ranging repertoire and innovative educational and audiencebuilding activities. He is currently Chief Conductor and Artistic Director of the Berliner Philharmoniker and Principal Artist with the OAE. Sir Simon first conducted the Berlin Philharmonic in 1987 and appeared regularly with the orchestra in subsequent years.The summer of 2006 saw the first instalment of their Wagner Ring Cycle at the Aix-en-Provence Festival. Sir Simon's most recent appearance at the Proms in Wagner brought forth ecstatic reviews, which bodes well for possible future installments of the Aix /Salzburg Ring on Bel Air Classiques.

"In what is both Mr. Rattle's and Aix's first Ring Cycle, "Die Walküre," the Ring's second chapter, was magically transformed by the enclosed space and lively acoustics of the Grand Théâtre de Provence. But where the new theater makes another significant difference is in Mr. Braunschweig's staging of the opera. Far more than in last year's "Rheingold," even the gods, notably Wotan and his twin children, Siegmund and Sieglinde, can now be felt to experience deeply human emotions. The final curtain brought a standing ovation for both orchestra and singers, with Ms.Westbroek singled out for her "extraordinary power and lyricism," as Jean-Louis Validire, Le Figaro's music critic, put it… The Ring Cycle continues here with "Siegfried" in 2008 and "Götterdammerüng" in 2009 and, as with "Das Rheingold" and "Die Walküre," they will be presented afresh at the Salzburg Easter Festival the following year." The New York Times, July 5, 2007

Sir Willard White's patriarchal Wotan seems subtler on screen, more smouldering than stiff, and sings richly… Eva Johansson's… makes a fiery, youthful Brünnhilde, more at one with her fellow Valkyries - a fine bunch - than usual. Rattle's conducting… is easy enough to enjoy - fluent, often sweeping - and, of course, beautifully played by the Berliners...

Wind and brass detail, the accuracy and blending of the chording and that rhythmic precision which is a Rattle speciality lift the final colloquy between Wotan and Brünnhilde to Olympian heights.