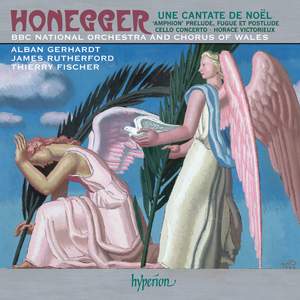 …an excellent introduction to a still underestimated composer. Thierry Fischer's vivid account of the Prélude, Fugue et Postlude makes one all the more astonished that this is the only recording... — BBC Music Magazine, December 2008, 5 out of 5 stars More…

Honegger’s Cantate de Noël, A Christmas Festival from John Rutter, and a superb anthology of twentieth-century carols from The Choir of Westminster Abbey.

Honegger’s Une Cantate de Noël is a Christmas number with a difference. His last work and one of his most popular compositions, it was written for the Basle Chamber Choir and Orchestra in 1953. The text of the cantata is derived from liturgical and popular texts— including Psalms and part of the Latin Gloria. A notable feature is the intertwining of traditional carols in French and German: appropriate for multilingual Switzerland and also perhaps symbolizing peace among nations seven years after the conclusion of World War II. Honegger scored the cantata for solo baritone, mixed chorus, children’s choir and an orchestra including organ. The combination of the different texts and forms creates a wonderfully uplifting effect.

This recording from the BBC National Orchestra of Wales under Thierry Fischer also includes a selection of Honegger’s other great orchestral works, all displaying the serious symphonic intent which marked his greatest compositional achievements. Horace victorieux is described as a Symphonie mimée d’apres Tite-Live (‘mimed symphony after Livy’) and was originally conceived as a ballet. The scenario derives from the Roman legend of the combat of the Horatii and the Curiatii. Scored for a large orchestra, it is flamboyant, dissonant, even raucous, and highly coloured. Honegger’s mastery of fugue, so prevalent in Horace victorieux, is further illustrated in his Prélude, Fugue et Postlude.

Honegger’s Cello Concerto was premiered in Boston in 1930 and is a charming, urbanely lyrical work, with a distinct tinge of jazz—perhaps actuated by the thought of the American premiere. It was written for the celebrated cellist Maurice Maréchal, who wrote the cadenza himself. In the event, Maréchal provided a brilliantly effective display-piece taking advantage of many of the outrageous aspects of virtuoso cello technique (notably majestic triple- and quadruplestopping). The brilliant young cellist Alban Gerhardt, celebrated for his performances of little-known cello concertos in Hyperion’s Romantic Cello Concerto series, is the soloist.

…an excellent introduction to a still underestimated composer. Thierry Fischer's vivid account of the Prélude, Fugue et Postlude makes one all the more astonished that this is the only recording available of this powerful piece. In the Concerto, Alban Gerhardt ranged from the seductive to the sensational... in the Cantate de Noël... the music grows and grows over the implacable tread of the bass, until the tension is broken by bright children's voices singing 'Joie et paix sur toi, Israel' - truly inspired moment...

The works collected here cover the full range of Honegger's mature career, from the volatile 'mimed symphony' Horace victorieux, his first major orchestral utterance (1920-21), to his final completed work, Une cantate de Noël (1952-53).
In expressive range, the music alternates from Yuletide light and shade to the Stravinskian high jinks of the Cello Concerto's finale (1929), to the high drama of Horace victorieux, not otherwise available.
Horace victorieux was the first real indication of Honegger's natural genius for large-scale orchestral composition. Based on Livy's bloodthirsty tale of Publius Horatius, the score combines vigorous, martial allegros depicting the combat and evocative lyrical episodes for the uneasy love of Horatius's sister for his enemy, Curiatius.
Heard in abstract, it proves a compelling symphonic poem of elemental power. There is a hint of the same quality in the less intense Prelude,Fugue and Postlude Honegger extracted in 1948 from his 1929 score for Amphion, although its atmosphere – based on Greek myth – is quite peaceable. There is a real touch of Christmas to the Cantata, one of Honegger's most popular works despite its gloomy, tonally ambiguous opening quarter. It is excellently sung.
Fischer directs controlled but expressive accounts of all four works which would grace any collector's shelves. Gerhardt is excellent in the Concerto, although its delicate, plaintive opening is eclipsed by proximity to Horace's close. Hyperion's superb recording has much to commend it, dealing superbly with some huge dynamic ranges.

Fischer directs controlled but expressive accounts of all four works which would grace any collector's shelves. Gerhardt is excellent in the Concerto…