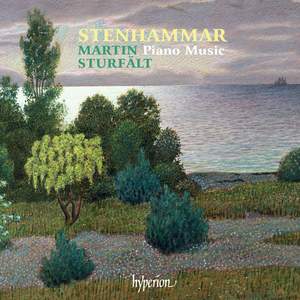 Although Stenhammar's orchestral and concertante works are now quite well known, the music he wrote for the piano has, until recently, been unfamiliar. As a recitalist he seemed to value the... — Gramophone Classical Music Guide, 2010 More…

Stockholm-born Wilhelm Stenhammar was the most outstanding musical personality in Sweden of his time. As a pianist he brought high-quality music-making to audiences throughout the country through several hundred solo recitals and chamber music concerts; as music director of the Gothenburg Symphony Orchestra he created Sweden’s first truly professional ensemble, persistently championing contemporary Scandinavian composers and introducing his audiences to numerous new works; and as a composer (like Elgar, largely self-taught) he created some of the most important and carefully crafted music ever to come out of Sweden, ranging from symphonic works and operas to chamber music and lieder. The start of Stenhammar’s career was in many ways that of an archetypal Romantic pianist-composer: even as a child he had already composed numerous pieces for piano, including three sonatas, the first dating from 1880.

Much of his piano music is firmly in the repertoire, including the extraordinary Nights of Late Summer—one of Stenhammar’s last works. The pastoral title and miniaturist structure belie the enormous emotional range of the piece. It is a deeply romantic exploration of moods of introspective gloom and wandering desolation. The five short movements make great demands on the pianist. The Three Fantasies Op 11 from 1895 have become the most frequently played of Stenhammar’s piano pieces. The musical language is more immediately communicative than in Stenhammar’s other piano works, something which has without doubt contributed to their popularity.

However, this disc also includes a complete rarity: the early Piano Sonata in G minor. This piece was never published, and was tracked down by Martin Sturfält in a handwritten copy from 1940 (used for all previous recordings) which contained a number of mistakes. Sturfält has edited the work for publication, and it is this version that has been recorded here.

This beautifully played disc is the perfect introduction to Sweden’s ‘national composer’.

Although Stenhammar's orchestral and concertante works are now quite well known, the music he wrote for the piano has, until recently, been unfamiliar. As a recitalist he seemed to value the music of others more than his own. He gave his splendid G minor Sonata (composed at 19) its premiere in May 1891 and then never played it again! Yet it is an ambitious, romantic work with an unforgettable main theme dominating its first movement, and in many ways it is an equivalent in its youthful ardour of the Brahms F minor work.
Stenhammar did, however, take the Three Fantasies, Op 11, of 1895 into his repertoire.
They are Brahms-influenced, the first again boldly passionate, but the composer's own personality comes through, notably so in the ingenious Dolce scherzando and the closing Moltoespressivo. The five pieces which make up Nightsof Late Summer are certainly atmospheric but not overtly descriptive: their feeling is personal and introspective, although the exception is the closing charming Poco allegretto, which has almost a whiff of Grieg. But the late A major Sonata (composed in the same year) is a highly individual work balancing serious, even sombre, lyricism with drama and closing with a vibrant unpredictable finale. Martin Sturfält suggests it has an affinity with Beethoven.
He plays all this music with powerful feeling and understanding, and great spontaneity – as at a live recital – and the recording is very real indeed. Well worth exploring.

Martin Sturfält… plays all this music with powerful feeling and understanding, and great spontaneity - as it a live recital - and the recording… is very real indeed. This is a disc well worth exploring.