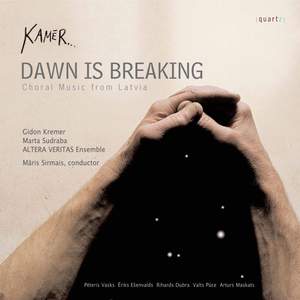 Ešenvalds: A Drop in the Ocean

Vasks: Ziles zina (The Message of the Titmouse)

The youth choir Kamer... was founded in 1990 on the initiative of conductor Maris Sirmais, who is still the artistic director and principal conductor. Kamer... now includes about seventy young singers, Among the choir’s top honours is the European Grand Prix for Choral Singing (Goriza, Italy, 2004). Kamer... was the first Latvian choir to win this prize. The competition is organized by the six most prestigious international choral competitions in Europe.

Kamer… has worked with some of the world’s leading musicians in concerts and festivals in Latvia and abroad. They have sung alongside Gidon Kremer, who appears on this album and the KREMERata Baltica under the noted conductor and soloist Peter Schreier, as well as violists Yuri Bashmet and Maxim Rysanov, cellist Julius Berger, and many others. The choir has also participated in personal concerts for the composers Arvo Pärt, Giya Kanchelli and Peteris Vasks. In 2006 Kamer... performed in a concert at Latvia’s National Opera House in Riga for a meeting of NATO Heads of State.