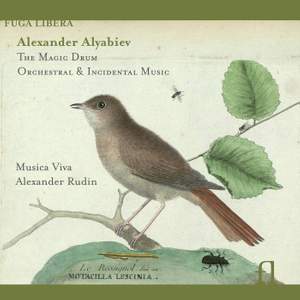 Alyabyev: Symphony for four horns and orchestra No. 3 in E Minor (in one movement)

Alexander Alexandrovich Alyabiev (1787-1851) was the greatest Russian musician of his generation. His life reads like a novel: an officer with the imperial army, he was 'contaminated' by liberal ideas in Paris in 1812; got close to the Decembrist movement, was denounced in the 1820s and deported to Siberia a few years later; and finally gets back to Moscow in 1843, in pretty poor health. His famous romance, The Lark, which was later popularised by the variations of Glinka, Liszt and Vieuxtemps, was actually written while he was in jail. But this very lark hides an astounding number of other achievements: 5 Operas, 23 Vaudevilles, Symphonic music, Chamber music (long ago lovingly recorded by the Beethoven Quartet) and piano scores.We discover a very personal, inventive composer, reminiscent of the young Schubert, clearly worthy of rediscovery.