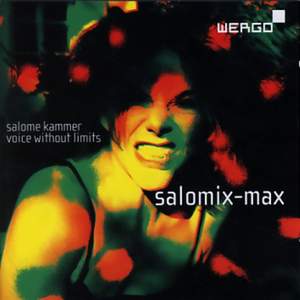 "When I began to take an interest in the vocal music of the 20th century, I of course encountered the unforgettable singer Cathy Berberian (1928-1983), who was the muse of so many composers in the 1950s and '60s. She had no qualms about using all possible musical styles and her courage and her readiness to cross borders changed the direction of musical history. It is to her that we owe a masterpiece like Luciano Berio's Sequenza III, which I sing here as a homage to Berberian." Salomé Kammer

This CD could be called 'the many voices of Salomé Kammer': another artist who is able in her interpretations to exploit the entire spectrum of the human voice. Cathy Berberian would have turned 80 on 4th July.