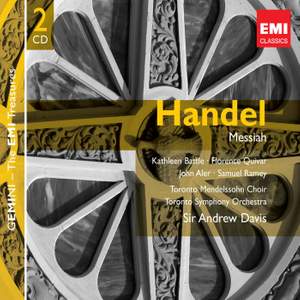 Handel: Ev'ry Valley Shall Be Exalted

Handel: And The Glory Of The Lord Shall Be Revealed

Handel: But Who May Abide The Day Of His Coming

Handel: And He Shall Purify

Handel: Behold A Virgin Shall Conceive

Handel: O Thou That Tellest Good Tidings To Zion

Handel: For Behold, Darkness Shall Cover The Earth

Handel: The People That Walked In Darkness

Handel: For Unto Us A Child Is Born

Handel: There Were Shepards

Handel: And Lo, The Angel Of The Lord

Handel: And The Angel Said Unto Them

Handel: And Suddenly There Was With The Angel

Handel: Glory To God In The Highest

Handel: Then Shall The Eyes Of The Blind Be Open'd

Handel: He Shall Feed His Flock Like A Shepherd

Handel: His Yoke Is Easy, His Burthen Is Light

Handel: Behold the Lamb of God

Handel: He Was Despised

Handel: And With His Stipes We Are Healed

Handel: All They That See Him, Laugh Him To Scorn

Handel: He Trusted In God

Handel: Behold, And See If There Be Any Sorrow

Handel: He Was Cut Off Out Of The Land Of The Living

Handel: But Thou Didst Not Leave His Soul In Hell

Handel: Unto Which Of The Angels

Handel: Let All The Angels Of God Worship Him

Handel: Thou Art Gone Up On High

Handel: The Lord Gave The Word

Handel: How Beautiful Are The Feet

Handel: Their Sound Is Gone Out Into All Lands

Handel: Why Do The Nations So Furiously Rage Together

Handel: He That Dwelleth In Heaven

Handel: Thou Shalt Break Them

Handel: I Know That My Redeemer Liveth

Handel: Since By Man Came Death

Handel: Behold, I Tell You A Mystery

Handel: The Trumpet Shall Sound

Handel: Then Shall Be Brought To Pass The Saying

Handel: O Death, Where Is Thy Sting

Handel: But Thanks Be To God

Handel: If God Be For Us

Handel: Worthy Is Lamb That Was Slain…Amen

Handel’s most popular oratorio, if not his most popular work, was premiered in Dublin in 1741. Although Handel achieved wonders in his music some of the success is surely due to the superb text provided by Charles Jennens, a highly educated man who towards the end of his life embarked on an edition of Shakespeare. He was 41 when he gave Handel who was then 56, words that were not too literary nor too specific, but, by using Old Testament prophecy, escaped the accusation of blasphemy had he given a life of Christ drawn from the gospels; even the title itself Messiah (rather than Christ) shows his determination to make the work appreciated by all religious denominations not specifically Christians.

Handel must have been pleased since he responded with music that is at once immediate and memorable and works equally well with small forces – soloists, choir of 20, orchestra of 35 – to ones which fill the largest possible halls. This recording, conducted by Sir Andrew Davis, is of the latter kind.