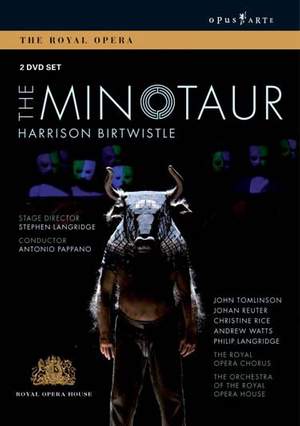 This opera, premiered at the Royal Opera last April, seems to me to be a masterpiece, of the kind that one feels the greatness of before one has a complete understanding of it. …the Minotaur... — BBC Music Magazine, December 2008, 5 out of 5 stars More…

This world premiere of a gripping new work by composer Harrison Birtwistle and librettist David Harsent, commissioned by The Royal Opera, brings the monstrous, Greek mythological character to the stage. The Minotaur, part man, part beast, trapped in his labyrinth and constrained by his bloodthirsty role there, longs to discover his true identity and his own voice. Athens must pay a blood sacrifice to Crete and among the innocents is Theseus, who has come to challenge the violent Minotaur, but who also attracts the attention of Ariadne, half-sister and keeper of the monster; it is with her help he succeeds.

‘Thanks to a superb cast and impeccable playing under Antonio Pappano, the evening is a glittering success. …what Birtwistle has done is give us one opera inside another. The outer one is strident and earthbound; the inner one – ending with the Minotaur's Caliban-like

This opera, premiered at the Royal Opera last April, seems to me to be a masterpiece, of the kind that one feels the greatness of before one has a complete understanding of it. …the Minotaur is a terrifying and pained figure. This performance is the climax of John Tomlinson's career, in a part written with his huge, gravelly voice in mind. The other compelling figure is Ariadne... Christine Rice, bearing the weight of exposition and of suffering, uses her wonderfully rich mezzo to stunning effect.

Birtwistle's latest large-scale music drama, written for Covent Garden, is a quite different experience on DVD: what might have been planned by composer and stage director to be witnessed from a distance is shown in unsparing close-up.
But this seething, monumental reinvention of one of the most disquieting Greek myths – with a pithy libretto by David Harsent – is neither betrayed nor diminished by this excellent film.
Only in its final stages does the opera's focus shift decisively to the doomed Minotaur from the scheming Ariadne, and the drama's most essential point is that this Ariadne – as different from Strauss's as Birtwistle's Orpheus is different from Gluck's – is in her own way as much of a monster as the half-man/half-bull. These demanding roles are projected with maximum musical eloquence by Christine Rice and Sir John Tomlinson, no doubt because – as Rice makes clear in the absorbing 30-minute documentary that accompanies the performance – what is demanding is also intensely rewarding to singers prepared to commit themselves to a steep learning curve. Equal commitment is evident in Johan Reuter's Theseus, the conventions of heroic posturing given new depth and relevance in text, music and vocal acting alike. We see little of Antonio Pappano and his orchestra, but the excellent sound never lets us escape the inexorable magnetism of the instrumental continuum.

The filming reinforces the strengths of Stephen Langridge's tightly controlled, potently expressive production in an economical yet atmospheric setting, with the whole ensemble totally engaged in the drama's dark enterprise. Repeated hearings underline that, in the end, this tragedy is the more convincing for the way its turn towards pathos does not involve any false consolation.

The work’s transition to high-definition video is marvellously achieved...the opera’s incarnation on DVD never appears stilted or ‘stagey...The sound qualities of the recording are also outstanding, capable of revealing—in all its shocking majesty—the detail, subtlety and visceral power of Birtwistle’s extraordinary score.

Birtwistle's idiom, always abrasive, has developed here a more lyrical strain...The impact of the opera is greatly heightened not just by the casting but by staging by Stephen Langridge...[Pappano] excels himself, conducting an electrifying performance with orchestra and chorus finely coordinated.