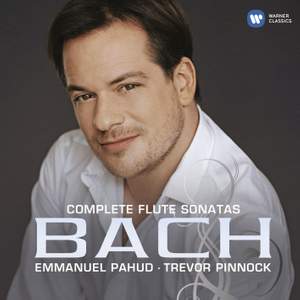 Emmanuel Pahud plays with a pleasingly rounded tone, a commendably restrained vibrato and, above all an unerring sense of what the music has to offer. …in the B minor Sonata, the diamond of... — BBC Music Magazine, November 2008, 5 out of 5 stars More…

Emmanuel Pahud follows his release of newly composed concertos by Marc André Dalbavie, Michael Jarrell and Matthias Pintscher with a programme comprising the complete flute sonatas of Johann Sebastian Bach. In addition to the sonatas BWV 1020, 1030-1035 and the Trio Sonata BWV 1039, Pahud performs the popular Partita for Solo Flute in A Minor, BWV 1013. His partner, at the harpsichord, is the renowned period instrument soloist and conductor Trevor Pinnock.

With the juxtaposition of these two releases, Pahud, one of today’s most exciting and adventurous musicians, demonstrates his mastery of and sympathy for music composed nearly three centuries apart.

Bach is believed to have composed his flute sonatas BWV 1030-1035 between the 1720s and 1741, following the innovation of the transverse flute, the instrument that superseded the recorder. After Johann Joachim Quantz demonstrated the new instrument throughout Europe in the early 1720s, Bach celebrated its technical and expressive qualities and newly available tonal colours in this series of sonatas, which are among his best known chamber works. He also featured the flute in the Brandenburg Concerto No. 2 and in the Benedictus of the Mass in B Minor.

There is some debate over the provenance of the Sonata BWV 1020 in G Minor, which some believe was composed by Carl Philipp Emanuel Bach, rather than by his father. C.P.E. Bach, however, gave the credit to his father. The sonata is played today by both flutists and violinists. Silvia Careddu is the second flautist in the Trio Sonata BWV 1039 in G Major, composed in 1720. The earliest work in Pahud’s programme is the Partita for Solo Flute BWV 1013, composed in 1718.

Emmanuel Pahud, Principal Flute of the Berliner Philharmoniker since the age of 22, with the exception of a year-and-a-half-long sabbatical, has also appeared as soloist with many of the world’s other leading orchestras under conductors including Abbado, Rattle, Zinman, Maazel, Gergiev, Gardiner, Harding, Järvi, Pinnock, Jordan and the late Mstislav Rostropovich. He gives recitals with pianists Eric Le Sage, Yefim Bronfman and Hélène Grimaud and performs jazz with Jacky Terrasson. Pahud appears regularly at the major festivals in Europe, North America and the Far East.

Since signing an exclusive solo recording contract with EMI Classics in 1996, Emmanuel Pahud has recorded a broad range of repertoire to wide critical acclaim. Sales of his CDs number in excess of 400,000 worldwide. His EMI discography is set to be one of the most significant contributions to recorded flute music. In addition to the Dalbavie, Jarrell and Pintscher concertos, other recent releases include the Nielsen Flute Concerto (and Wind Quintet) with the Berliner Philharmoniker/Simon Rattle and the Brahms Clarinet Sonatas (arranged for flute) and the Reinecke Flute Sonata with Yefim Bronfman.

A previous (2001) Bach recording with the Berliner Barock Solisten won Pahud the Echo Klassik award while Gramophone praised the “stylish performances, with excellent choices of tempo, awareness of the character of the dances … buoyant rhythms and beautiful shaping of phrases… very fine Bach playing, to be wholeheartedly recommended.”

Trevor Pinnock is an internationally acclaimed harpsichordist and conductor and a pioneer of historical instrument performance with The English Concert, an orchestra that he founded in 1972 and led for the next thirty years. He currently divides his time between conducting, performing as soloist and chamber musician and educational projects.

In 2008-2009, Emmanuel Pahud and Trevor Pinnock will perform the Bach sonatas in Japan, Korea, Europe (Vienna, Paris, Hamburg, Copenhagen and London) and the U.S., including Carnegie Hall. Other 2008-2009 performance highlights for Pahud include European tours with the Mahler Chamber Orchestra/Marc Minkowski and with the Franz Liszt Kammerorchester, as well as the American premiere of the Dalbavie Flute Concerto with the Cincinnati Symphony Orchestra/Paavo Järvi.

“Pahud’s playing is always crisp and stylish, whether in virtuoso display or in more tender passages where the flute traces a line of filigree delicacy.” The Daily Telegraph

Emmanuel Pahud plays with a pleasingly rounded tone, a commendably restrained vibrato and, above all an unerring sense of what the music has to offer. …in the B minor Sonata, the diamond of the collection, Pahud and his sensitive harpsichord partner, Trevor Pinnock, are unrivalled.

Bach flute sonata recordings on modern instruments are not unknown but a 'complete' set of all seven authentic and doubtful works, plus the Sonata for two flutes and continuo (better known as the G major Gamba Sonata), is bit of a rarity. That said, we can be glad that the excellent Emmanuel Pahud is the one to have taken up the challenge, for this is a recording of great skill and refinement which should give considerable pleasure. He has teamed up with distinguished Baroque-specialising partners to achieve results that are technically assured and stylistically confident.
The most immediately attractive feature of these performances is their touching and gentle beauty; Pahud never forces the sound and maintains an evenly controlled tone at all times, with no tightening on high notes or straining on low ones. It is true that he is without the constant subtle shadings possible on a Baroque wooden flute, but for the most part Pahud's playing shows a sensitive concern for detailed and enlivening articulation without being slave to it, and a keen sense of the music's greater rise and fall, revealed in some drowsily relaxed slow movements.
The recording is not generous to the harpsichord, which, while crisply caressed as ever by Pinnock, is too far back to contribute as meaningfully as it should in the sonatas where it has an obbligato role equal to the flute's, and neither is there any great sweetening of sound for compensation. But this is fine stuff nevertheless.

…this is a recording of great skill and refinement which should give considerable pleasure. …Pahud never forces the sound and maintains an evenly controlled tone at all times, with no tightening on high notes or straining on low ones.

Pahud is principal flute of the Berlin Philharmonic, and his larger than life playing here is the equivalent of that orchestra playing a Brandenburg concerto - magnificent in its way, but not quite how Bach would have imagined it.