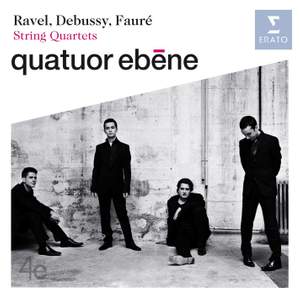 Dynamic ranges are wide, with Ravel's crescendos not underplayed in any mistaken attempt at classicism, and rubatos are applied with tactful expressivity. — BBC Music Magazine, November 2008, 5 out of 5 stars More…

Awards,  The Quatuor Ebène and the Gramophone Awards

The young French string quartet scoop the Record of the Year prize for their disc of Ravel, Debussy and Fauré on Erato, with Gerald Finley and Julius Drake, Stile Antico, Fretwork and Steven Osborne among the category-winners.

When the Quatuor Ebène was signed to Virgin Classics in early 2008. Alain Lanceron, the label’s President, said: “The Quatuor Ebène is the embodiment of the modern string quartet. The extraordinary way its members craft their sonority, their re-examination of quartet masterpieces, their readiness to engage with music beyond the traditional repertoire, their innovative and creative approach: all these factors have led us to invite them to add their lustre to Virgin Classics' roster of artists. We welcome them with enthusiasm – the same kind of enthusiasm they bring to everything they do."

Formed in France in 1999, the Quatuor Ebène took its name from ebony, the precious and exotic wood used in instrument-making. The award-winning ensemble has since achieved an enviable international reputation for refined, dynamic musicianship, minutely responsive teamwork, an adventurous spirit and even a taste for improvisation. The Quartet’s repertoire ranges from Haydn and Mozart, cornerstones of the Classical repertoire, through the 19th and 20th centuries to contemporary composers and jazz.

The Quatuor Ebène’s debut recording on Virgin Classics brings together the string quartets of the three emblematic French composers of the late 19th and early 20tb centuries: Fauré, Debussy and Ravel. The Debussy and Ravel quartets represent a traditional pairing in the catalogue, but they have rarely been coupled with the Fauré, his final work, composed in his late seventies. As it happens, Ravel dedicated his own quartet to Fauré, who was his teacher.

“Interpreters of rare understanding and communicative flair” The Strad

Dynamic ranges are wide, with Ravel's crescendos not underplayed in any mistaken attempt at classicism, and rubatos are applied with tactful expressivity.

Among the many breathtaking moments on the Ebène Quartet's CD, there is one in particular that keeps calling one back. It occurs at around 1'14” into the Ravel's slow movement, the second set, which enters like a bittersweet memory before a literal recollection of the Quartet's opening motif. Other subtle details of interpretation include the chord at 2'03” that underpins a transformation of the first subject before the same chord leads directly into the second subject – and when it does, utterly changing in character, turning warmer, more openly inviting. The ebb and flow of the passage at 5'29” where the second subject rides above an arpeggiated accompaniment, music that looks both forwards to Debussy's own La mer and backwards to Rimsky's Sheherazade (or so it seems). There's a fluidity to the Ebène's playing of both works that suits the music's character, a mood of wistfulness too that the Ravel especially benefits from. This improvisatory approach is hardly surprising from an ensemble that is also celebrated for its jazz performances.
It was a brilliant idea to include Fauré's late Quartet which, in a sense, provides the linchpin for all three works, the Ravel having been composed in Fauré's class to mark the 10th anniversary of Debussy's quartet, and which is dedicated to Fauré. An extraordinary work by any standards, ethereal and other-worldly with themes that seem constantly to be drawn skywards, Fauré's Quartet responds well to the Ebène's sensitised approach.
Anyone requiring this particular trio of works won't be disappointed, which makes the various pairings of the Ravel and Debussy quartets on their own seem somewhat less enticing.

There's a fluidity to the Ebène's playing… that suits the music's character, a mood of wistfulness too that the Ravel especially benefits from.

A commanding performance from Quatuor Ebène in Ravel's String Quartet. The range of colours they bring to this music is always extraordinary, and in my opinion the balance between all four voices is just right.

it is the performance of the Fauré that makes this disc so rewarding. Late Fauré...is notoriously elusive, both melodically and harmonically. But the Ébène manage to make everything in the three-movement quartet seem perfectly logical, utterly natural and close in sensibility to the works by Debussy and Ravel that flank it.