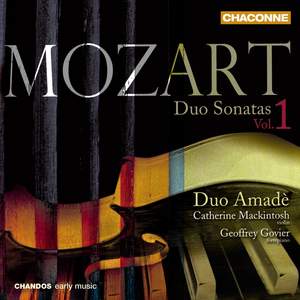 For Catherine Mackintosh and Geoffrey Govier the 'rules' of historically informed performance have become second nature; we get the impression they're playing for sheer enjoyment of the music.... — Gramophone Classical Music Guide, 2010 More…

Mozart’s charming and intimate late violin sonatas KV 301, 302 and 303, composed in Mannheim in 1778 are performed here on period instruments by Duo Amadè (Catherine Mackintosh and Geoffrey Govier) and coupled with two sets of variations based on French popular tunes.

Mackintosh and Govier have a love for this repertoire which stretches back to the late 1980s when they first met at the Royal College of Music, London. They formed Duo Amadè in order to perform the charming and intimate works of Mozart for this combination in concert often carried out with readings from his family letters. In 2006 Duo Amadè performed the whole cycle at the Royal College of Music.

Violinist Catherine Mackintosh is best known as the former leader of Orchestra of Age of Enlightenment and part of the Purcell Quartet. She is joined by fortepianist Geoffrey Govier. Geoffrey plays a fortepiano after Anton Walter made by Christopher Clare in Cluny while Catherine plays a violin dating from 1703 by Giovanni Grancino. These instruments bring a lightness and freshness of articulation to these delightful works, entirely in keeping with the spirit of enlightenment in which the sonatas were written. It is their aim is to record the complete cycle of mature sonatas.

For Catherine Mackintosh and Geoffrey Govier the 'rules' of historically informed performance have become second nature; we get the impression they're playing for sheer enjoyment of the music. All the distinctive moments are appreciated and given due emphasis but in a spontaneous way, the interpretative points never going beyond what musicians with good rapport might do on the spur of the moment. Yet it's obvious that Govier and Mackintosh are careful, as well as spirited, interpreters. The recorded sound and balance are excellent, and they artfully control their dynamics so that principal and subsidiary lines are clearly distinguished.
The concluding Rondo of K302 contains many octave passages shared by piano and violin; here, with precise matching of tone colour, articulation and volume, Govier and Mackintosh turn what might seem like a rare lapse of Mozartian imagination into a delightful colouristic device. In the first movement of this sonata they make the most of the quasi-orchestral writing, with its pulsating crescendi, horn imitations and tremolando effects. Colourful in a different way is the minor section in K301's finale, where the con sordino piano's soft quality perfectly supports the poised violin melody.
You may wonder whether to favour Duo Amadève; or the impressive Podger/Cooper team (see aobe). The latter mix into their programmes the juvenile works from the 1760s, but if you are most interested in the great series of works starting with K301, Duo Amadève; may suit you better.

For Catherine Mackintosh and Geoffrey Govier the "rules" of historically informed performance have become second nature; we get the impression they're playing for sheer enjoyment of the music.