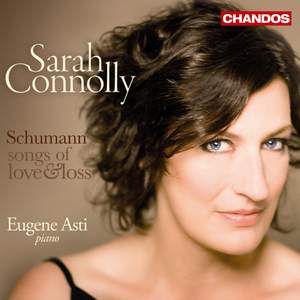 Schumann - Songs of Love and Loss

By placing the poignant invocation of 'Mein schöner Stern', emblem-like, at the top of this artfully programmed Schumann recital, Sarah Connolly reveals much of the composer's fervent inwardness... — BBC Music Magazine, November 2008, 4 out of 5 stars More…

The British mezzo-soprano Sarah Connolly, twice nominated for a Grammy, here performs a collection of songs by Robert Schumann, which combines two song cycles from the extremely prolific song year 1840 with several songs from the composer’s last years. She is accompanied by Eugene Asti.

Sarah Connolly fell in love with Schumann’s songs in her youth. She has sung them since her early days as a performer and in the booklet she and Eugene Asti write, ‘at the heart of Schumann’s music on this recording lie a profound melancholy and a personal and completely honest, open-hearted empathy for the poetry, which is totally disarming. All the stories and situations depicted in these songs were so much a part of the composer’s own life experience that we just cannot help but be touched and moved by them. Perhaps it is for these reasons that our love for Schumann is especially great, and we feel privileged to be able to share this extraordinary music with you’.

It is often claimed that Schumann’s late songs, which include the first seven on this CD, show a composer in decline – a charge that is refuted by such wonderful Lieder as the Wilhelm Meister settings and ‘Nachtlied’ (Goethe), ‘Der Einsiedler’ (Eichendorff), ‘Aufträge’ (L’Egru), ‘Mein schöner Stern!’ (Rückert), ‘Requiem’ (Dreves), the Lenau settings of Op. 90 and the Gedichte der Königin Maria Stuart, all of which are as fine as anything Schumann wrote in 1840, his great ‘song’ year.

The album’s key work is the rarely recorded Gedichte der Königin Maria Stuart, songs on five poems attributed to Mary, Queen of Scots. They were his last Lieder and the most austere that Schumann ever wrote. He composed the set in 1852 during a period of deep depression and offered the work as a Christmas present to his wife, Clara. It is also matched here by ‘Requiem’, setting a translation by Leberecht Blücher Dreves of an old sacred Latin text. This requiem, from Op. 90, was one of four that Schumann composed in the last years of his creative life, and it seems likely that the proliferation of such settings around 1850 had symbolic import – ‘requiems, after all, are written for oneself’, as Schumann once confided to a friend.

By placing the poignant invocation of 'Mein schöner Stern', emblem-like, at the top of this artfully programmed Schumann recital, Sarah Connolly reveals much of the composer's fervent inwardness - something she and her accompanist, Eugene Asti, capture so well throughout.

Sarah Connolly's beautifully sung Frauenliebe und-leben often called to mind Janet Baker's early recording with Martin Isepp… Connolly, like Baker, gives the cycle a more melancholy, introspective cast than most. Connolly is magnificently desolate and accusatory in the final song of bereavement, with a graphic sense of withdrawal from the world before the healing keyboard postlude.

the intimate restraint of Connolly's singing frequently suggests the sad analysis of emotion from a retrospective or nostalgic viewpoint...[Liederkreis] is superbly done - an unnerving voyage through a soured Romantic landscape, awash with intimations of the horrors that lurk unsuspected in the corners of the psyche.