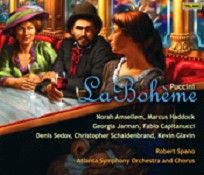 Complete opera with full libretto at a special price (2 for 1).

As even the casual opera fan knows, La Bohème is the story of friendship, love and loss in a community of bohemians in 19th century Paris. “Like the characters themselves, the singers on our recording are young, and that freshness is apparent in their voices,” says Telarc President Robert Woods, co-producer of the recording. “I am continually taken by the sincerity and vitality of this cast. When it was decided to perform and record the opera at the opening of the ASO’s 2007-08 season, conductor Robert Spano knew that he wanted his Bohème to be youthful, theatrical, and most importantly, believable.”

The cast of La Bohème is a dynamic group of talented performers. Soprano Norah Amsellem (Mimi) has sung La Traviata’s Violetta at the Vienna State Opera, Turandot’s Liù at the Metropolitan Opera. Soprano Georgia Jarman’s (Musetta) has performed at the New York City Opera and Cincinnati Opera, and has been engaged by the Caramoor Festival, Glimmerglass Opera and Dallas Opera, among others. Tenor Marcus Haddock (Rodolfo), who has performed at the Paris Opera, La Scala, Metropolitan Opera and Lyric Opera of Chicago, is known for both dramatic intensity and technical brilliance.

This season marks the 30-year association of Telarc and the Atlanta Symphony orchestra. During that time, the ASO has recorded almost 100 albums – a body of work that has been recognized with 26 GRAMMY® Awards. Now in his seventh season as music director of the ASO, Robert Spano has enriched and expanded the orchestra’s repertoire through his characteristically innovative programming. As a result, he has elevated the ensemble to new levels of international prominence and acclaim. Since he began his tenure with the ASO, he has conducted the orchestra in 10 recordings, winning six GRAMMY® Awards in the process.